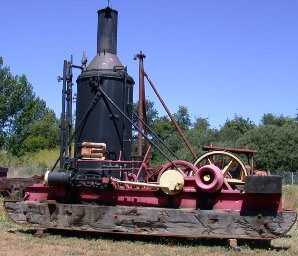 Year Built:
1906
Type of Equipment:
Donkey
Horizontal Spool
Traction:
Sled
Manufacturer:
Eureka Foundry Company
Manufacturer Location:
Eureka, CA
Non-Motive Power:
Steam
In Service:
Salmon Creek, Humboldt County, CA
Owner:
Chris Baldo
This horizontal or side spool donkey was built by the Eureka Foundry Company in 1906 as Construction Number 4929. The first reported use of steam for logging purposes was at Salmon Creek in Humboldt County in 1881 for Dolbeer and Carson. John Dolbeer’s patent for a side spool machine was granted in 1882. Even with the use of the scalloped metal plates on the front beam, these machines had difficulty when pulling logs that lay off to the side of the donkey and keeping the line feeding squarely on the spool. These problems were overcome with the development of the vertical spool donkey in 1883. By 1900, several manufacturers of steam logging equipment were building machines with mainline and haulback drums, but in the redwood region, the simple and powerful spool donkey continued to be built into the early teens. In 1910 the Eureka Foundry was building five side spool donkeys for The Pacific Lumber Company. This steam donkey was purchased by Alexander Christie of Fieldbrook, California, and then passed to his son, Alex, in 1952. It is currently owned by Chris Baldo of Willits Redwood Company.
Home
Schedules
Membership
Projects
Equipment
Library
Highline Newsletter
About us