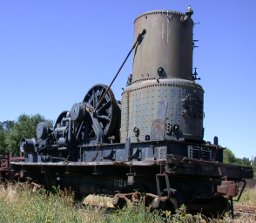 This yarder was shipped December 8, 1923 to the Fobes Logging Company of Wickersham, Washington. It later went to work in the woods for the Eatonville Lumber Company of Eatonville, Washington. The yarder was purchased and rebuilt by Washington Machinery Company of Seattle and sold to Judson Pacific Murphy Kiewit Company for a second life working on various waterfronts on the Pacific Coast constructing breakwaters. It was finally purchased by Harry Schildwachter of Alaska Tug and Barge who stored the yarder for many years at the Antique Gas and Steam Engine Museum at Vista, California. Harry Schildwachter and the Antique Gas and Steam Engine Museum donated the slackline yarder to Roots of Motive Power in September 1993.