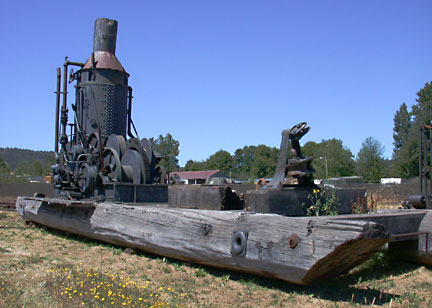 Photo:
© George Bush
Year Built:
1922
Type of Equipment:
Donkey
Horizontal Spool
Yarder
Logging Equipment
Traction:
Sled
Manufacturer:
Washington Iron Works
Manufacturer Location:
Seattle WA
Non-Motive Power:
Steam
In Service:
Mendocino Lumber Company
Owner:
State of California Department of Forestry
Washington Iron Works (WIW) Simplex Yarder #3404 is on permanent loan to the Mendocino County Museum from the State of California Department of Forestry. The WIW Yarder was purchased new in the early 1920s by the Mendocino Lumber Co. for use in the Little North Fork region of their timberland holdings. The depression of 1929 proved disastrous for the local timber economy and the yarder was abandoned until times improved. Unfortunately, by the time the timber economy had improved, the Caterpillar tractor had arrived and this yarder never worked again.

The yarder stood atop a coastal ridge for decades, an interesting destination for hikers from nearby Mendocino Woodlands. The ridge formed the boundary between Jackson State Forest and Georgia Pacific (GP), the two organizations that spearheaded efforts to save the yarder as a monument to Mendocino County’s logging history.

Preliminary efforts to bring WIW #3404 back to civilization began with meetings with Jackson State Forest, Georgia Pacific, Roots of Motive Power, Mendocino Woodlands Association and the Mendocino County Museum. After several site visits to examine the machine and determine the potential for long term preservation, a work party was held on September 17, 1989 to prepare the yarder for transport. The crumbling sled was measured so we could construct a duplicate, all bolts were removed from the boiler, stack, stack apron, etc., so they could be removed with a crane. All plumbing connecting the boiler to the yarder frame was recorded and disconnected. This activity set the stage for the October move. Roots volunteers present in 1989 were Chris Baldo, John Bradley, Pete Cafferata, Greg Randrup, Jennifer Randrup, Jim Yokum, Jeff Yokum, Ken Smith, and Duncan Neff.

On October 6, 1989 museum director Dan Taylor, Curator Dot Brovarney and Roots member Gene Roediger met CDF Ranger Forest Tilley at GP’s access road off highway 20 and drove to the yarder site. Roots volunteers and members of Jerry Philbrick’s logging crew were there studying the huge machine. We had planned to ship the yarder in two pieces: the boiler and the yarder frame complete with drums. After surveying the yarder and the size of Philbrick’s loading machines, it was decided that the main drum had to be removed from the yarder frame to allow the frame to be lifted onto the low-bed. As the yarder was estimated to weigh 60-70,000 pounds, this was not an easy task. Roots member Duncan Neff said “Power’s not in our name for nothing.” Everyone agreed that the level of rust, considering the years and conditions, was quite low. In fact, the lubrication was so good that Mike Jensen commented he wished he had whatever the product was, to use on contemporary machinery.

By 2:30 in the afternoon, the low-boy pulled into the Museum with the boiler and main spool on it. John Bradley and Bob Hinerman had steamed up the FF-400 Raymond Pile Driver and were ready to unload when the first low-bed arrived. At 8:30 that evening the truck came back with the yarder frame. It was a sight to see it looking like the Empire State Building moving down Highway 20 in the dark. It was even more impressive at night with the Raymond Pile Driver, its firebox glowing and sparks flying from the stack, as it lifted the yarder frame from the low-bed. Even Jerry Philbrick’s low-bed driver, who hauled the biggest, heaviest, newest logging machines, marveled at the silent power of steam as it gently lifted the load from his truck.

The project was a cooperative effort of CDF Mendocino Woodlands Assoc., Georgia Pacific Corp., Jerry Philbrick Logging, Roots of Motive Power, and the Mendocino County Museum. Jerry Phibrick’s employees who participated in the effort were: Elwin Stillwell, Wayne Baker, Mike Jacobsen, Mike Jensen, Bob Klee and John Starkey. There were many, many volunteer hours spent on this project by Roots of Motive Power members. Also helping with the move were George Williams from CDF and Scott Feller of GP.

From the Roots of Motive Power Newsletter, August 1999, a report from 10 years ago