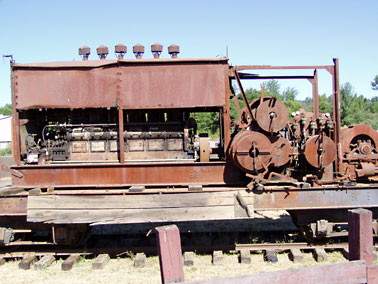 Photo:
© George Bush
Year Built:
1928
Type of Equipment:
Donkey
Horizontal Spool
Logging Equipment
Rail Car
Traction:
Rail Trucks
Manufacturer:
Washington Iron Works
Manufacturer Location:
Seattle WA
Non-Motive Power:
Diesel
In Service:
Simpson Timber Company
Donor:
Simpson Timber Company
Owner:
Roots of Motive Power
From the Roots of Motive Power Newsletter, August 2004
The dark smudges lingering on the ceiling of the Roots Restoration Facility just above the stacks of our Washington Iron Works Estep Yarder bear evidence that Vrain Conley and crew (Percy Daniels, Keith Rongey, Mike Wade, Ed Vikart, Harry Pond, Bert Bertolini and others) have made significant progress in their restoration efforts. Friday, May 28th, 2004 was the day the Estep first rumbled, if a bit uncertainly, to life; flames erupted from some cylinders, black oily soot from others, but the sound of the engine was unmistakably Estep. Having helped to arrange the donation of the Estep from Simpson Timber Company in Shelton, Washington in 1992 and the transport back to Willits, it is a tremendously rewarding feeling personally to see this rarest of artifacts close to operation. Work continues on fine tuning the injectors and fuel system, but the Roots membership should soon be able to enjoy the extraordinary spectacle of the only complete Washington Estep Yarder in existence in operation.