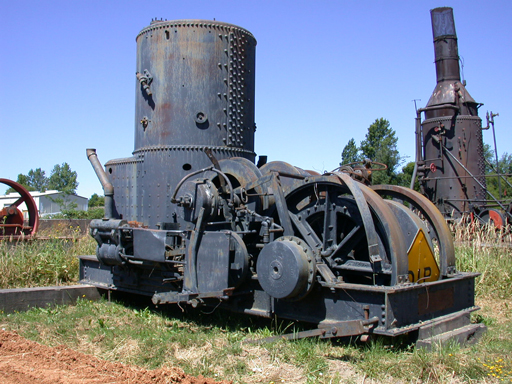 Photo:
© Bruce Evans
Year Built:
1922
Type of Equipment:
Donkey
Yarder
Logging Equipment
Traction:
Sled
Manufacturer:
Washington Iron Works
Manufacturer Location:
Seattle WA
Non-Motive Power:
Steam
In Service:
Craig Lumber Company, Philo, CA
Donor:
Angela Prather
Marion Prather
Owner:
Roots of Motive Power
The 3451 Washington Iron Works, Seattle, yarder was built in September of 1922 and worked at the Craig Lumber Company in Philo, CA from 1946 to 1950. The engine is similar to the 3404 (both built 1922) but has 12″ x 14″ cylinders whereas the 3404 “California Standard” simplex yarder has 12″ x 17″ cylinders. It also has an extended firebox, but the greatest difference is the two-speed friction assembly on the wide-faced mainline drum.

It was donated by Marion and Angela Prather, and was moved to Roots on July 5th, 1991.