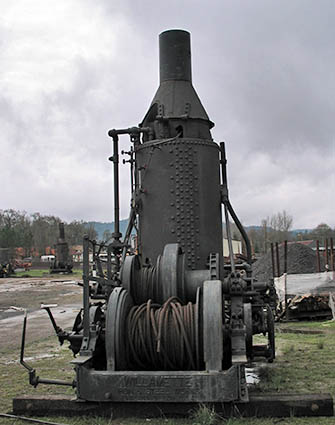 Year Built:
1923
Type of Equipment:
Donkey
Loader
Logging Equipment
Loader
Traction:
Sled
Manufacturer:
Willamette Iron and Steel Works
Manufacturer Location:
Portland, OR
Non-Motive Power:
Steam
In Service:
Westside Lumber Company, Tuolumne, CA
Owner:
Chris Baldo
This steam donkey was built by Willamette Iron and Steel Works of Portland, Oregon in 1923 as C/N 2139 for the Westside Lumber Company in Tuolumne, California. The engine is a 9 ¼ X 10 (9 ¼” bore, 10″ stroke) 3-Drum Loader and was used in the woods to load logs on railroad cars for the trip to the sawmill in Tuolumne. The top two drums were used for loading in a variety of loading systems, such as Hayrack boom, heel boom, etc. The front drum was the car spotting drum and was used to move the loaded car out of the way and to position the next empty car for loading.

Westside Lumber Company operated an extensive narrow gauge logging railroad that extended southeast of Tuolumne to the boundary of Yosemite National Park. The logging railroad operation, powered largely by Shea steam locomotives, lasted until the early 1960s. The Company favored Willamette donkeys in the woods and many logging sides utilized Willamette 12 X 14 Humboldt Yarders to bring logs to the landing and Willamette 3-Drum machines to load. Much of the Westside properties were then purchased by Glen Bell, the founder of Taco Bell, who opened a logging history theme park in Tuolumne called the Westside and Cherry Valley Railroad. Willamette #2139 was one of the steam donkeys Glen Bell pulled in from the woods and put on display at the theme park.