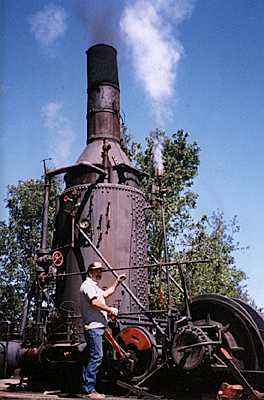 Year Built:
1913
Type of Equipment:
Donkey
Horizontal Spool
Logging Equipment
Traction:
Sled
Manufacturer:
Willamette Iron and Steel Works
Manufacturer Location:
Portland, OR
Non-Motive Power:
Steam
In Service:
Mendocino Lumber Company
Donor:
Louisiana Pacific
Owner:
Mendocino County Museum
This machine was built for the Mendocino Lumber Company. Much improved over the smaller Dolbeer Spool donkey, this yarder has 2 cable drums and could hold a much longer cable. It also has the abiliy to wind the cable back by itself. The boiler is much larger so this engine has more horsepower than the smaller ones. The machine was totally restored including new boiler tubes, bearings, chutches, and new log skids.

Used for “High Pole” logging where meany cables were strung from a tall pole (called he “spar pole”) which raised the large end of the logs off the ground to carry them through the air to a “Landing” where they would be loaded onto trains for transportation to the sawmills.

Under this engine, the Skids or Donkey Sled is an important part. Made by hand, it must be tough enough to carry the engine over the roughest ground and give the engine a firm foundation. Donkey engines would travel up to 13 miles under their own power by running the cable out, hooking it to a tree and pulling themselves forward to a new logging site.