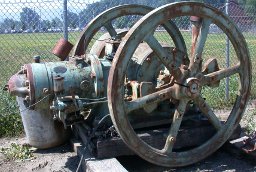 Year Built:
1915
Type of Equipment:
Engine
Stationary
Manufacturer:
Fairbanks-Morse Company
Manufacturer Location:
Beloit, WI
Non-Motive Power:
Diesel
Donor:
Clyde Schurman
Owner:
Roots of Motive Power
This engine was built in 1915 by Fairbanks-Morse and Company. It is a one-cylinder, two-cycle engine rated at 25 horsepower. These engines were capable of operating on a wide variety of fuels, including kerosene, distillate, solar oil, gas oil, fuel oil and crude oil. The combustion process is not unlike that of a modern diesel engine, in that the fuel is compressed to the point that it automatically ignites. The engines usually had a flywheel-mounted simple weight governor to maintain a constant speed. This engine was donated by Clyde Schurman in 1985. Photo by Bruce Evans