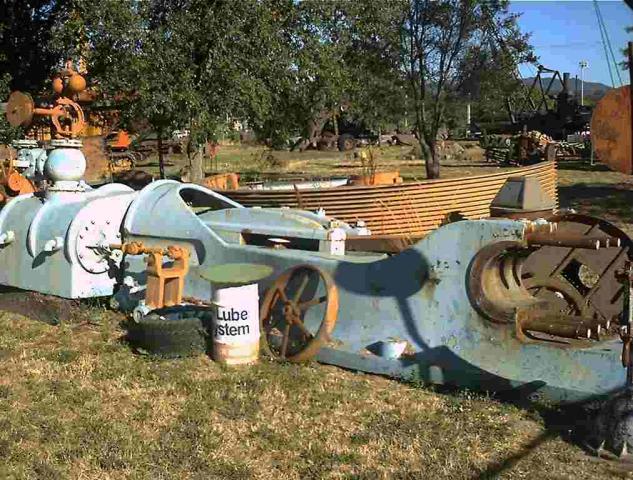 Year Built:
1914
Type of Equipment:
Engine
Stationary
Manufacturer:
Golden State and Miners Iron Works
Manufacturer Location:
San Francisco, CA
Non-Motive Power:
Steam
In Service:
Albion Lumber Co. Navarro Sawmill
Donor:
Arthur S. Siri Jr.
Owner:
Roots of Motive Power
Roots Acquisition
Roots of Motive Power volunteers headed to Santa Rosa in the Fall of 1988 to dismantle and transport to Willits a huge sawmill steam engine. The engine was donated to Roots by Arthur S. Siri Jr., president of Siri General Contractors. The steam engine had been a landmark on Santa Rosa Avenue as a static display since 1941 when it was removed from a Northern California sawmill by Santa Rosa boilermaker Ras Bjornstad and placed in his yard for display. The subsequent tenant, Arthur Siri Sr. continued to proudly display the engine until 1988 when a change in operations made their Santa Rosa yard surplus.

Union Lumber Company Days
Walter Tock of Ukiah and Peter Tock of Santa Rosa remember when Engineer, Berthel Brayton ran the machine in the 1920’s at the Union Lumber Company. Visiting their uncle during that time, they recall the brick engine room and the engine running a big line shaft that powerd 3 band saws, 3 edgers, 3 banks of cut off saws and all the conveyors. There was a chain block hanging over the flywheel just in case the wheel stopped at dead center. The flywheel itself was sixteen feet in diameter, a crankshaft diameter of fourteen inches, and a cylinder bore of twenty-four inches. Although simple in design, the engine posed some problems because of its enormous size and weight.

Restoration on Hold
Because of the large size of the engine, Roots volunteers have put this project on hold until the Restoration Building is built. The next step is to determine the engine’s long-term location and build a base. Then restoration can begin on the engine itself.

News on the “Siri” Engine
Thanks to Bobbie Yokum’s “Acquisition” article on the Siri Engine, I was contacted by a friend, Ronald Waltenspiel of Healdsburg, with information concerning the Siri Engine which Roots moved from Santa Rosa to Willits in 1988. Ronald’s father had operated a propane business for years in Sonoma county and had as an employee a former boilermaker who had worked for Ras Bjornstad from 1933 through 1950. for those who are not up on the story, Ras Bjornstad was the Santa Rosa area boilermaker that had purchased the”Siri Engine” from a redwood region sawmill for display at his yard on Santa Rosa Avenue.

The engine was manufactured by an early San Francisco company, the Golden State and Miners iron Works. It has a 16 foot diameter rope drive flywheel, a crankshaft diameter of 14 inches, and a cylinder bore of 24 inches. The construction company, Siri General Contractors, had purchased the Bjornstad property and continued to proudly display this artifact of northern California’s industrial past until the yard was vacated in 1988. Aurthur S. Siri Jr. donated the engine to Roots of Motive Power at that time.

The sawmill location where the engine operated remained a mystery for years, until on October 28, 1999, Roland Waltenspiel introduced me to Loren Jensen, Ras Bjornstad’s welder and boilermaker. Loren lived on his family ranch near Pocatello, idaho and followed his brother down to Santa Rosa to accept a job with Ras in 1933. Ras had learned the boiler trade in Bremerton, Washington, working on ships’ boilers during World War I. The Bjornstad shop at that time was located on first Street in Santa Rosa, before moving out to the south end of Santa Rosa in the late 1930’s.

In 1940, Albion lumber company-Southern Pacific Railroad had finally decided to scrap out their sawmill at Navarro which had been shut down for years. Ras purchased several steam donkey boilers that were still sitting on donkey sleds next to the Company’s railhead. he also purchased the large, rope drive steam engine that operated the sawmill to place in his yard as advertising. According to Loren, the manilla drive rope was still in place when his crew of four men arrived to dismantle the engine. Loren dismantled the engine much the same as Roots did in 1988, except using a smaller crane, he had to separate the steam cylinder from the rest of the bed of the engine. He distinctly remembered having to cut the connecting rod of the engine in half, an item Roots still has to repair. Loren also built the metal base used to display the engine in Santa Rosa and noted that the room under the main engine frame was used as an oil shed for the company. I asked why the engine was painted blue and orange, garish colors for a steam engine; Loren said all of Ras’s equipment, trucks, air compressors, etc. were painted blue and orange.