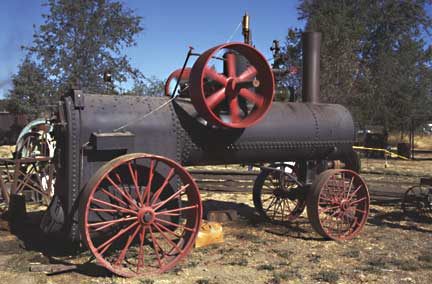 Year Built:
1909
Type of Equipment:
Engine
Portable
Traction:
Wheels
Manufacturer:
Port Huron Engine and Thresher Company
Manufacturer Location:
Port Huron MI
Motive Power:
Animal
Non-Motive Power:
Steam
In Service:
Pickerel Lake, MI
Donor:
Louisiana Pacific
Owner:
Roots of Motive Power
Portable steam power units adapted to a variety of work on America’s farms, factories, and sawmills, replacing animal power and water power as the prime movers. The steam engine was bolted directly to the top of the boiler shell. Portable steam engines were mounted on skids, such as the Mansfield steam engine in front of the Museum, or on non-driven wheels, such as this Port Huron, to be pulled by horses to the next job. Water pumps, machine tools, sawmills, shingle mills, threshing machines; a multitude of machines could be operated with a flat belt off of the main drive pulley. This portable boiler and engine was rated at 45 horsepower at the drive pulley. Most steam engine manufacturers also offered self propelled Traction Engines for sale, which had the capability of plowing the fertile plains throughout the west, or pulling heavy loads on wagons.

This portable steam engine was originally sold to a Mr. H. Clausen in October 1909 in the small town of Pickerel Lake, Michigan, on the shores of Lake Superior north of Marquette, Michigan. It was purchased by the Louisiana Pacific Corporation for display in a planned Museum at Samoa, California. The engine was donated to Roots of Motive Power in 1998 by Louisiana Pacific.