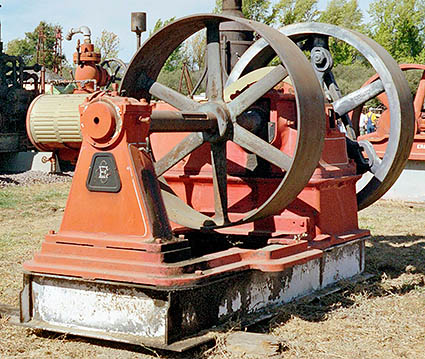 Year Built:
1926
Type of Equipment:
Engine
Stationary
Manufacturer:
Skinner Engine Company
Manufacturer Location:
Erie PA
Non-Motive Power:
Steam
In Service:
Stanford University Presbyterian Hospital, San Francisco, CA
Donor:
Exploratorium
Owner:
Roots of Motive Power
The Skinner Uniflow Steam Engine represented the height of efficiency of steam engine design when it was produced in 1926. The uniflow design solved a fundamental heating-cooling inefficiency of other steam engine designs by allowing steam to pass through the cylinder in one direction, utilizing intake valves in the head, and exhaust ports in the cylinder walls. This engine originally furnished the electricity for the Stanford University-Presbyterian Hospital in San Francisco, where it operated for nearly a half century. It is direct connected to a 150 KW, 250 volt direct current generator and weighs 43,000 pounds. When the Stanford University Medical School bought the engine in 1926, it paid the Skinner Engine Company $12,307. The engine has a cylinder diameter of 19 inches, a stroke of 20 inches, operated at 200-225 RPM, and utilized a steam boiler pressure of 125 PSI.

In 1974, Stanford Hospital switched to a more modern power supply, and the engine was donated to the Exploratorium at the Palace of Fine Arts in San Francisco. It served as a demonstration object for the wonders of steam power until changes in museum focus made the engine surplus in 1994. In 1995, the Board of Directors of the Exploratorium donated the Skinner Uniflow Engine to Roots of Motive Power Inc.