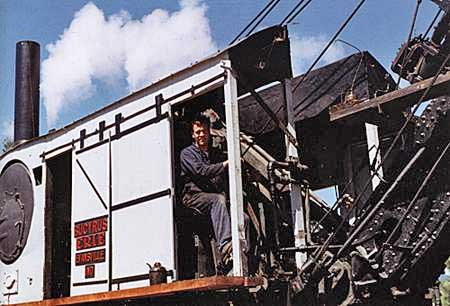 The move of the steam shovel north by Roots of Motive Power volunteers was a major project in itself. Two weekends prior to the move were spent in South San Francisco preparing the machine for disassembly. Since the bolts had last seen a wrench in 1932, the shovel was a little resistant to the disassembly process. Eventually the battle of wills was won by Roots, and the shovel came apart. The Roots crew for the move included Bud Garman, Duncan Neff, John Grupp, Walt Daniels, Jack Wade, Bob Hinnerman, Dave Hope, Chris Baldo, Sr., Heath Garman, John Bradley, Chris Baldo, Jr., and Ken Smith.

Loading day in South San Francisco started before the sun peeked over the Oakland Hills. Two rented cranes from Bigge were in place and had the shovel boom and dipper stick loaded on Gregg Simpson’s lowboy by sunrise. Next, an assortment of smaller machinery and parts were loaded on a Don Nolan truck. The shovel house, weighing 75,000 pounds, was separated from the track frame using both cranes and loaded on a Shuster Transportation lowboy with Bob Smith at the wheel. Finally, the track frame assembly was loaded on a lowboy from Golden West Builders. Right on schedule, the last truck pulled through the Golden Gate Bridge toll plaza at noon and was safely in Willits at 4 PM.

Unloading at the County Museum grounds in Willits went just as smoothly. A forklift from Willits Redwood Company unloaded the first two trucks. Bill Daniel of Daniel Steel and Machine Works in Ukiah donated the crane services to unload the shovel. The track frame was set off first, and after solving the rigging puzzle, the shovel house was neatly set back down on its base as the first drops of the approaching rainstorm spattered down. Roots of Motive Power would like to thank all the local businesses which helped make the steam shovel move a success. It is their constant support that allows Roots volunteers to continue their programs of early day machinery demonstrations for the public.