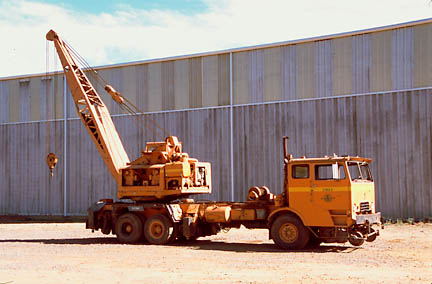 Year Built:
c. 1969
Type of Equipment:
Heavy Equipment
Crane
Traction:
Wheels
Manufacturer:
Ernest Holmes
Manufacturer Location:
Chattanooga TN
Motive Power:
Diesel
Non-Motive Power:
Diesel
In Service:
Eureka Southern
Donor:
North Coast Railroad Authority
Owner:
Roots of Motive Power
The railroad truck-mounted crane was first mentioned as being inoperable, and therefore surplus, to the North Coast Railroad Authority (NCRA) in the fall of 2002 during a conversation between Chris Baldo of Roots and John Darling (the railroad operator). John Bradley of Roots did the initial inspection of the crane with John Darling and determined that the machine could be made operable. Chris Baldo and John Bradley then requested that the NCRA donate the crane to Roots; this occurred about 9-1-03. The truck crane was made operable by John Bradley over a period of about two weeks and on 9-21-03 was moved under its own power from the NCRA yard in Willits to the Roots site.

History
The machine was built by the Ernest Holmes Company about 1969 for use on Eastern railroads. In 1986 the Eureka Southern (formerly NWP) bought the crane and moved it to the Eureka-Willits area for work on that line re-railing cars and car repair work. It was last used in the Willits yard during the summer of 1987 for car repair work and has not been used since.