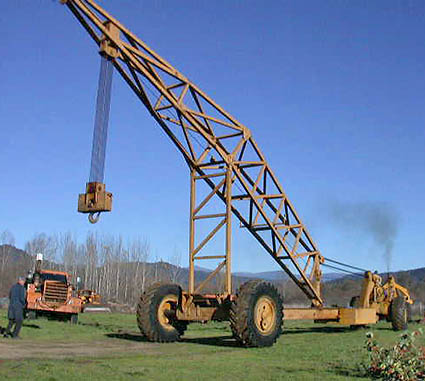 Year Built:
1944
Type of Equipment:
Heavy Equipment
Crane
Traction:
Wheels
Manufacturer:
LeTourneau
Manufacturer Location:
Peoria, IL
Motive Power:
Diesel
Non-Motive Power:
Diesel
In Service:
U.S. Navy
Owner:
Chris Baldo
Ken McCrary
The genius of R.G. LeTourneau’s over 200 patents elevates his status to a select list of American inventors. His ideas transformed the earth moving industry throughout the entire world, as well as developing the large electric drive log moving machines that are still the standard of the lumber industry. R.G started from relatively humble beginnings in Stockton, California, where his first job was moving dirt to level farmland. He later designed, built and sold many of the country’s earliest scrapers from his factory in Stockton, later from headquarters in Peoria, Illinois, and still later from four additional international plant sites. During WWII LeTourneau built much of the earth moving equipment used by the military, as well as designing and building other specialized equipment for the Armed Forces. One such piece of equipment is the Super C Model Tournacrane, built in 1944 for the U.S. Navy.

Ken McCrary and Chris Baldo recently acquired an R.G. LeTourneau Tournacrane from the Bottimore Ranch in Herald, CA, and moved the crane to the Roots yard in Willits. It is fitting that some of R.G. LeTourneau’s legacy resides in the Roots Collection.

The front end of the Tournacrane is a single axle LeTourneau Super C tractor powered by a 150 HP Cummins Diesel engine. LeTourneau’s Super C powered scrapers revolutionized the earth-moving business in the United States. The crane features a unique system of threaded axles for spreading the wheels apart under the hook to make the crane more stable.

The R.G. LeTourneau Heritage Center is dedicated to preserving for posterity the remarkable life and accomplishments of Robert Gilmour LeTourneau, an innovative giant of engineering, industry and Christianity; the man, his machines and his ministry.