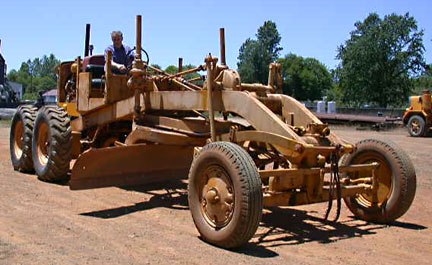 Year Built:
1936
Type of Equipment:
Heavy Equipment
Grader
Traction:
Wheels
Manufacturer:
Caterpillar Tractor Company
Manufacturer Location:
East Peoria, IL
Motive Power:
Diesel
In Service:
Ross Ranch
Donor:
Mike Ross
Owner:
Roots of Motive Power
This grader, serial number 6K395 SP, has the older three-cylinder diesel engine with side-mounted two-cylinder gas starting engine. It was donated to Roots by Mr. Mike Ross of Fort Bragg on 4-19-02. The grader had belonged to Mike’s father and was used on the Ross Ranch properties north of Fort Bragg. Mr. Ross Sr. had started to restore the grader but he passed away before completion. After the grader was donated to Roots, member John Bradley spent many days re-assembling and then loading it for transporting to Willits on 5-21-02. The hauling of the grader from Cleon (just north of Fort Bragg) to Willits was done as a donation by Mike Anderson, owner of Anderson Logging in Fort Bragg. The grader is now operational and is used for railroad grade preparation at the Roots site in Willits. by John Bradley