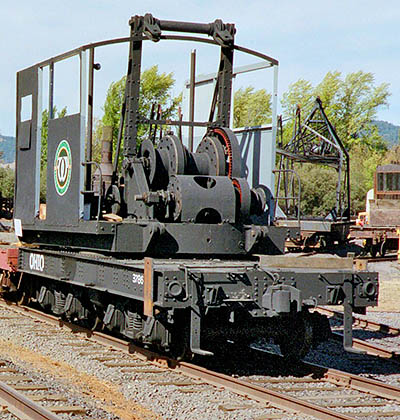 Those attending the 2004 Roots Festival were able to admire Roots’ latest acquisition, a beautiful 1926 steam-powered 20 ton Ohio Locomotive Crane, donated by Durwood “Doc” Boyles of Springfield, Oregon. The crane was disassembled and then transported on three Sherman Brothers trucks, the first arriving in advance with a load of loose materials: the boom, boiler, cab parts, etc. The second truck, containing the car body and railroad trucks, was aligned with the tail of our eventual loop track, snap track was attached connecting the track on the low bed to our railroad, and the car body rolled off onto its new home railroad. The truck with the house, steam engines, drums, etc., was then positioned next to the car body. With a 75 ton crane provided by Bill Daniel of Daniel Steel and Welding of Ukiah, CA, the house was gently positioned and attached to the car body.

Much work remains in the assembly process: boiler installation, firebrick and all plumbing, boom installation and new wire rope, re-assembly of the steel cab, and new wooden windows and doors. We are progressing on the boiler; it has been hydro-tested for its original working pressure of 125 PSI, original boiler construction records for the Johnson Brothers boiler were obtained from the National Board of Boiler Inspectors, and a preliminary inspection has been performed by the California State Boiler Inspector.

The Ohio Locomotive Crane Company was founded in 1909 by Charles F. Michael in Bucyrus, Ohio. The family-owned company manufactured railroad cranes until it was sold to an investment group in 1981. The investors later purchased Ohio Crane’s only real competitor in railroad cranes, American Hoist and Derrick, in 1987 and still operate the business under the name of American and Ohio Locomotive Crane Company in Bucyrus, Ohio.

A unique feature of locomotive cranes is their ability to perform lifting operations while serving as a locomotive for one or more attached rail cars. They can quickly travel miles to remote job sites under their own power. Precision engineering and careful counter weighting enable them to work with very heavy loads while maintaining their center of gravity over a relatively narrow wheel base.

This Ohio Crane, Construction Number 3786, operated on Weyerhauser Company’s extensive railroad system which supplied their huge sawmill complex at Klamath Falls. Ohio Cranes were used for loading logs in the woods, as well as cleaning railroad ditches and other maintenance-of-way work. Number 3786 is presently equipped with a lattice boom and a clam shell bucket.

While still physically in Klamath Falls, the crane’s ownership passed to Ellingston Lumber Company of Baker, Oregon in 1966. Doc moved the crane to his yard in Springfield with the car body and house attached, the load weighing 127,000 pounds. He undertook a complete restoration project on the machine, including re-tubing the boiler, rebuilding most of the mechanical components, replacing a badly deteriorating cab, and painting the original Weyerhauser logo on the cab. The bulk of the work was performed by Doc’s talented shop crew of Chuck Dorn and Kent Jones. Unfortunately Doc passed away in the summer of 2004, without realizing his dream of seeing #3786 operating under steam.

The crane was donated by the family of Durwood “Doc” Boyles to Roots of Motive Power so future generations can enjoy the magic of steam power.