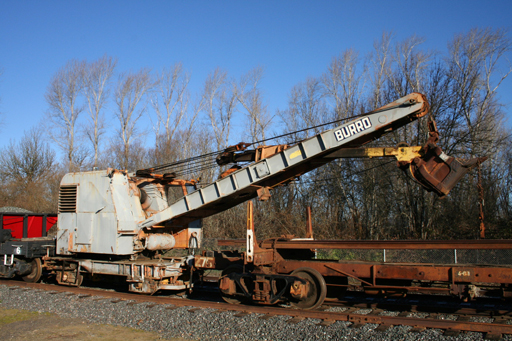 Burro cranes (some were outfitted with shovels, as the one at Roots) were designed to be self-sufficient maintenance-of-way tools. As such, they were self-powered, and could propel not only themselves, but could take along with them a flat car, gondola, dump car or other equipment needed for their work. Therefore, they could take with them rail, ballast, timbers or any other materials needed for track repair or construction.

These utilitarian rail vehicles have been built by several manufacturers, including Cullen-Friestedt, Federal Sign & Signal, and now by the Badger Equipment Company. But they have always retained the name Burro, and if you say Burro to a railroader, he knows that you’re not referring to the four-legged animal.

Burro cranes were built in several models, including the diminutive Model 15, Model 30, Model 40, and the more modern Model 50. The Model 40 at Roots has a 4-cylinder “Jimmy” diesel engine, and has been outfitted with a shovel. It spent its entire life working on the NWP, and was donated to Roots by the North Coast Railroad Authority. It sat derelict for years, and was retrieved by Roots from behind the Ukiah Depot—same place it was delivered in 1972.