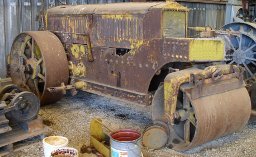 This roller, Construction Number 14795, was built in 1928 by the Buffalo Springfield Roller Company of Springfield, Ohio. It was purchased used in 1950 by Joe Ortega Construction of Cotati from George Williams of Marin Equipment. Joe used the roller in a variety of projects in Marin and Sonoma counties including the paving of the first two streets in Rohnert Park. The roller is currently owned by Chris Baldo of Willits Redwood Company.