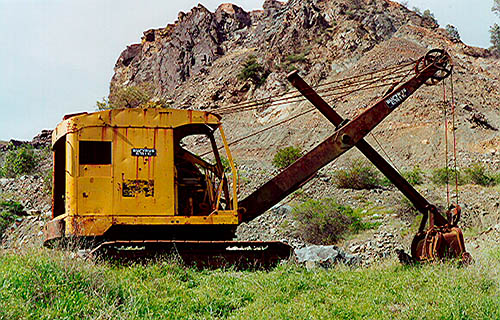 Photo:
© Chris Baldo
Year Built:
c. 1950
Type of Equipment:
Heavy Equipment
Shovel
Traction:
Treads
Manufacturer:
Bucyrus-Erie Company
Manufacturer Location:
Evansville IN
Motive Power:
Diesel
In Service:
Covelo, CA
Dos Rios, CA
Owner:
Chris Baldo
The Bucyrus-Erie 22B shovel was one of the most popular and versatile track cranes produced by the company. The 22B came equipped with the standard dipper stick shovel, dragline, dragshovel, clamshell bucket, crane boom, or pile driver. The shovel had a ¾ cubic yard bucket capacity and was offered with a variety of gasoline and diesel power options, this machine being equipped with a Caterpillar D-6 diesel engine with gasoline starting motor.