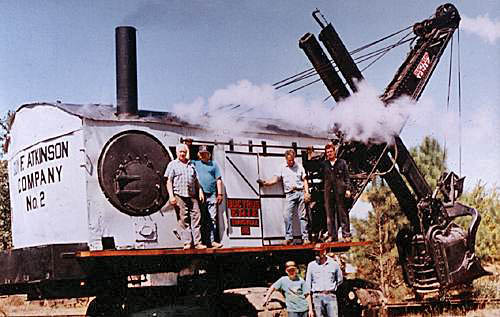 The 150,000 pound (75 ton) machine, 13½ feet wide and 15 feet tall, made its way to Willits on four trucks, past startled onlookers on San Francisco’s Nineteenth Avenue, puzzling tourists and joggers on the Golden Gate Bridge, not to mention a few newly respectful motorists in BMWs. The steam shovel joins the outstanding collection of industrial steam machinery on display by Roots of Motive Power at the Mendocino County Museum in Willits.
Early History
The steam shovel was built in 1932 amid the depression by the Bucyrus-Erie Company of South Milwaukee, Wisconsin, whose shovel manufacturing plant was in Evansville, Indiana. Bucyrus-Erie was America’s premier manufacturer of heavy excavation machinery and was formed in 1928 with the merger of the old Bucyrus Company founded in 1882 and the newer Erie Steam Shovel Company founded in 1913. Diesel and gasoline shovels were already in vogue by this time. In fact, the pair of shovels purchased by Atkinson in 1932 were the last two steam powered Model 50-B shovels ever built. The first machine, Serial Number 11,500, became GFACO Shovel #2, later to come to Willits. The second machine became Shovel #3, which was scrapped in 1954. Interestingly, GFACO Shovel #1 was a diesel powered Model 50-B purchased earlier.

Shovel #2 immediately went to work on Guy F. Atkinson Company’s San Gabriel Highline Road project near Azusa, California. In 1934, the shovel was sent north to GFACO’S contract to build the powerhouse and lock excavation for the new Bonneville Dam on the Columbia river. In 1937 the shovel was sent back to San Francisco to begin work erecting the 1939 World’s Fair Exposition buildings and the Tower of the Sun structure on Treasure Island. From Treasure Island, the machine was shipped to Hansen Dam near Los Angeles in 1938, thence to the Naval Ordinance Depot at Bellemont, Arizona in 1940, Neah Bay, Washington in 1943, and back to Los Angeles in 1946. Shovel #2 was retired from active service in 1946 but luckily was marked for preservation by the Guy F. Atkinson Company who stored the machine in operable condition at their Long Beach yard before moving it to South San Francisco in 1981.

The decision to preserve the steam shovel from 1946 to present, nearly half a century, could only have been made by a company with a sense of history. The Atkinson family is now in their sixth generation in the construction business in the United States, starting in 1830 with John Atkinson, an immigrant from Yorkshire, England. Like most building contractors of the period, the Atkinsons started as masons, building brick and stone structures, culverts and embankments for the Pennsylvania Railroad. The present Guy F. Atkinson Company was formed in 1929 by Guy F. Atkinson, grandson of John Atkinson. The list of projects built by the company is immense; the difficulty of their construction defies description. The Guy F. Atkinson Company has become one of the acknowledged leaders in the worldwide heavy construction industry.