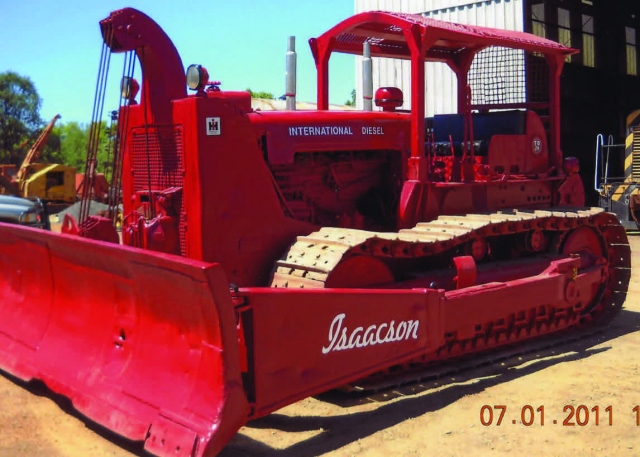 One of the machines with iconic status in the redwood logging woods was the International Harvest- er TD-24 crawler tractor. Introduced in 1947, “Big Red” was International’s answer to the Caterpillar D-82U and the Allis Chalmers HD-19, at least temporarily taking the title of the world’s largest and most pow- erful tractor. International used a new diesel engine, the D-1091, an inline six-cylinder with 1091 cubic inches of displacement, producing 180 net horsepower at a governed 1375 RPM.  The engine used the same starting system as previous IH diesels, whereby the engine was started on gasoline, and converted to diesel once the engine was warmed up. Weighing in at nearly 20 tons with a blade, the tractor was equipped with several “modern” features, including a 4-speed syncromesh transmission, and the Planet Power Steering system with power-shifted 2-speed planetary gears in each track. Putting one track in high range and one in low caused a gentle turn with power to both tracks. For sharper turns, the drive was disconnected to the inside track and a brake applied, as with a normal crawler tractor.

Initially International purchased their attachments – blades, scrapers, winches, cable controls – for the TD-24, from a variety of suppliers, Bucyrus-Erie, Carco, Heil and Isaacson, as they did not manufacture their own until 1954. International acquired the attachment divisions of Isaacson in 1952, and those of Bucyrus-Erie and Heil in 1953. By 1955, Allis Chalmers and Caterpillar had caught up with and passed International with the 44,000 pound, 204 HP HD-21 and the 40,310 pound, 185 HP D-8 13A. International responded in mid-1955 with the TD-24 Series 241, with the engine speed increased to 1400 RPM to produce 190 HP, and the weight to 40,375 pounds. International increased the D-1091 engine speed once again in 1958 to 1500 RPM, producing 202 net HP with a weight of 41,920 pounds. Competition continued between the major crawler manufacturers for the crown of the largest crawler tractor, with Caterpillar coming out with the D-8H 46A model in 1959, along with the yellow International’s TD-25 Series 250 tractor in mid-1959 pow- ered by the new DT-17 turbocharged diesel. The gear drive Series 250 tractor had a difficult time compet- ing with the powershift D-8 46A, and Caterpillar’s dominance in the crawler tractor business began to take hold. The introduction of the hastily designed powershift TD-25B did little to stem the tide.

Since its introduction, the International TD-24 was a common competitor with the Caterpillar D-8 in the Mendocino woods. Stevenson Equipment, the International dealer in Santa Rosa, sold logging contrac- tor Roy Stoddard the first logging equipped TD-24 in Mendocino County in 1948. Union Lumber Company observed the performance of the tractor and itself ordered its first TD-24, S/N 574, later the same year. Un- ion Lumber Company purchased ten TD-24s between 1948 and 1955, before the introduction of the TD-24 Series 241 in 1956. Union purchased twelve of the TD-24 Series 241 tractors in just four years. Union preferred to use the TD-24s as “wheel cats” to skid logs: tractors which pulled logging arches and were not equipped with dozer blades. The TD-24 was also a common feature in the Masonite woods with Harry Hil- debrand’s crew headed by Martin Rogers.

The TD-24 was a powerful and productive tractor, but it was beset with a chronic problem. Because of the starting system, the cylinder heads had two sets of  valve gear – one for gasoline operation and one for diesel operation. There was not much room left in the head design for coolant, which resulted in two types of TD-24s, those that had cracked their cylinder heads and those that were going to. Later TD-24s were equipped with additional elevated water storage to maintain coolant level in the engine heads on steep terrain. To increase cooling and reduce exhaust back pressure, International equipped TD-24s with two ex- haust stacks from the onset of production.

Roots of Motive Power was contacted early in 2011 by the Wilder family of Lower Lake, owners of the One Shot Mining Company. The Wilder family had been active in the mining business in the South Bay area for many years. They moved to Lower Lake, California, in 1965 and continued in the construction and mining business in Lake County. One of the partners in the One Shot Mining company was an Interna- tional tractor dealer in Sunnyvale, California, and it was not a great surprise that their fleet of equipment featured several International TD-24s. While keeping a TD-24 Series 241 for the continuing family opera- tions, the Wilder family decided to donate an earlier 1952 model TD-24. The Wilders had been avid readers of the Roots of Motive Power Highline for several years, and understood the importance of the International TD-24 in the development of the industry. The tractor was equipped with a logging canopy, an Isaacson angle blade, and a Pacific Car and Foundry (CARCO) logging winch. The tractor had originally worked at the Uncle Sam Mine on Mt. Konocti, before being purchased by William Wilder Sr. in 1965.

Troy James and Chris Baldo visited the site in Upper Lake where the tractor was stored, and plans were made for the move to Willits. Shuster Transportation supplied the lowbed for the tractor, while the angle blade was moved on a trailer supplied by the Roediger family. It is rare that Roots is bestowed with a gift of a piece of vintage equipment in such good operating condition. The tractor only required a set of new batteries, and the tractor roared to life and eagerly crawled onto the Shuster lowbed for the trip to Willits.

International Harvester had a long history in the farming industry, and the original TD-24 cab de- sign was entirely functional in that application. It was soon apparent that for logging applications with winch and blade controls, the cab design was decidedly un-ergonomic. The winch controls blocked access from the left side, the blade controls blocked access from the right side, the combined air cleaner/dash ex- tended into the operator’s lap, and the whole area was cluttered with control levers. The TD-24  Series 241 solved these problems by moving the air cleaner into the center of the engine compartment between the twin exhaust stacks, and moved the dash forward toward the firewall. The Wilder family had already made a partial “Series 241” conversion to the TD-24. For historical authenticity, Roots decided to retrofit the tractor to its original factory configuration. Luckily, the Wilders also had a TD-24 “parts tractor” in Lower Lake, and Roots was able to secure the necessary parts including the original dash and throttle con- trols, the correct hood, and the correct direct-drive generator.

The tractor received a thorough cleaning and preparation for paint, Yokum’s Body Shop in Willits completed some needed body work on the new hood and dash, and the entire tractor and attachments re- ceived a coat of primer and blinding International Harvester red paint from Troy James. A new seat was built and up holstered by Drew Wallace of Iron Paddock Upholstery in Ukiah, and the Isaacson logo for the blade was duplicated by Eric Hoggatt of Willits. Roots was also able to secure a complete set of de- cals from a tractor restorer in Wisconsin. The restoration was completed in time for the 2011 Frontier Days Parade in Willits, with the TD-24 loaded on Greg Simpson’s off-highway lowbed trailer behind the Pacific Lumber Company off-highway Kenworth #28 with Kirk Graux at the wheel.