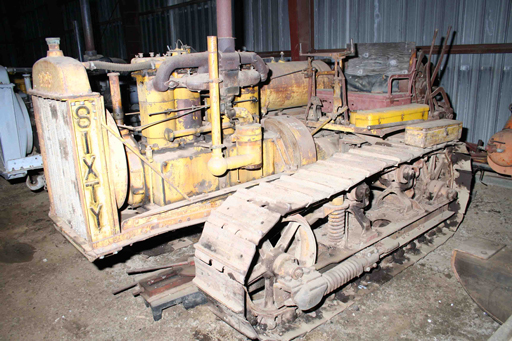 Photo:
© Bruce Evans
Year Built:
c. 1928
Type of Equipment:
Heavy Equipment
Tractor
Logging Equipment
Traction:
Treads
Manufacturer:
Caterpillar Tractor Company
Manufacturer Location:
East Peoria, IL
Motive Power:
Gasoline
In Service:
Caspar Lumber Company
Donor:
Alan Hill
Owner:
Roots of Motive Power
We received two intriguing donations that will soon be tied together forever. Roots member Alan Hill of Fort Bragg recently donated a Sixty Cat that originally operated for Caspar Lumber Company and had been used late in its life as a loading machine with a double drum winch on the back. The tractor was purchased by a farmer that soon grew tired of hauling the extra weight of the winch around. The winch was unceremoniously cut off with a torch and left for scrap. Alan Hill acquired the tractor many years later.

In a parallel story, Ben Mast, who for years operated a successful logging and sawmill business in the Laytonville-Branscomb area, purchased an inoperable Sixty Cat for parts and left the unneeded portion in his yard. As luck would have it, the unneeded portion contained a Willamette double drum loading winch. The winch was donated to Roots of Motive Power by Ben’s widow, Mildred Mast.

With the generous assistance of Laytonville logger Homer Helm, both the Sixty Cat and the double drum winch were hauled to his shop in Laytonville. Phil Robbins is preparing to unite the two pieces in the near future.

From the Roots of Motive Power Newsletter, April 2000

Update: The Sixty Cat and double drum winch were moved to the Roots facility in the fall of 2000.