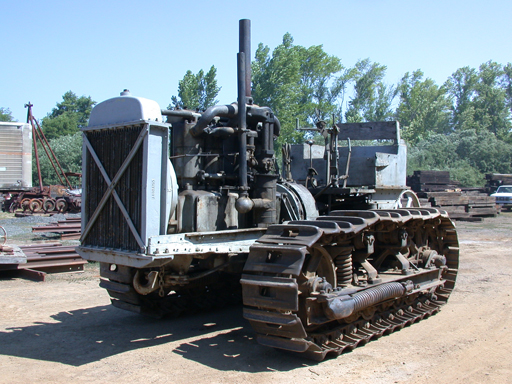 This particular tractor was built in 1928 for the Red River lumber Company in Westwood, California. It featured special snow tracks made with a magnesium alloy so the drive sprocket could push accumulated show out of the tracks.

The tractor also featured a Conwhit Conversion—an after-market logging conversion that offered an enlarged radiator and a special low gear for logging.

After spending most of its life in the Sierras, the tractor was purchased in 1946 by Seth Whelock who owned a shingle mill in Jackson Valley near Branscomb. Whelock used the tractor for salvage logging on Union Lumber Company property, where it worked until the 1950’s. It was purchased by Warren Branson in 1952, who used it sparingly and preserved it until the late 1960’s when it was purchased by Harwood Products.

The tractor was donated to the Mendocino County Museum in Willits in 1984 by Harwood Products of Branscomb. (Harwood ceased operations in 2008.)