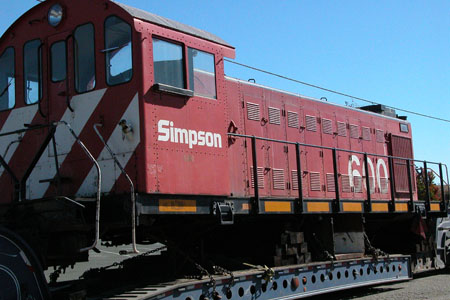 In recent years acquisitions for the Roots Collection have emphasized the transition era from steam to diesel power. Such was the case on October 11, 2005, with the arrival at the Roots facility of two early generation diesel-electric locomotives – the 1949 Baldwin Locomotive Works (California Western Railroad #53) and the 1950 American Locomotive Company (Simpson #600). Both of these locomotives had direct ties to the timber industry.

The first to arrive after a long journey from Simpson Timber Company in Shelton, Washington, was the Simpson #600, a 660 hp product of Alco in 1950. The Alco S-3 was built for Humble Oil Refining Company in Baytown, Texas, and was acquired by Simpson Timber Company in 1979 to serve their log dump at Shelton. Simpson Timber Company has been downsizing their railroad and the #600 was the only Alco left in their now all EMD (General Motors Electro-Motive Division) fleet. The locomotive was loaded at Simpson’s Dry Sort Yard at Matlock, Washington. Roots members Chris Roediger, Troy James and Jim Hansen were on hand to assist Snell Crane place the locomotive body on a low-bed truck. The wheel sets with the attached traction motors were placed on flatbed trucks with Simpson’s log stacker. The locomotive was unloaded in Willits with two 75-ton cranes supplied by Daniel Steel and Welding of Ukiah, California. The locomotive was put into service by Roots volunteers at the regular railroad training session on October 16th. Many thanks to Simpson’s Railroad Superintendent Don Sandridge and Roundhouse Foreman Cliff Carter for insuring that the locomotive move went smoothly and their encouragement that the locomotive would live a new life in the Roots collection.