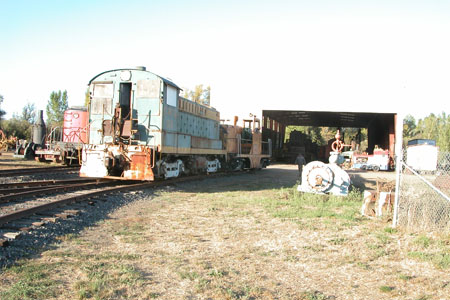 In the latter part of 1995 Roots acquired a vintage diesel-electric locomotive as a donation from the collection of Chris Baldo. The locomotive is the former California Western Railroad (CWR) #53, which was built by the Baldwin Locomotive Works at their Eddystone, Pennsylvania plant in August 1949. The serial number, DS4-4-1000, means Diesel Switcher with 4 axles, all 4 powered, and 1000 horsepower.

The Baldwin Locomotive Works, founded in 1831, was the largest, longest-lived and most successful of the steam locomotive builders. From the early years of the 20th century Baldwin had a relationship with the Westinghouse Electric Company to build electric locomotives. Electrification was expensive, but for mountainous terrain it could pay for itself and, in addition, some cities were banning the steam locomotive because of its pollution and the propensity for accidents in smoke-choked terminals. Baldwin built or subcontracted out the bodywork and running gear, and Westinghouse built the electrical gear. Baldwin produced small gas-mechanical internal combustion engine locomotives from about 1910 to 1928, and some experimental diesel locomotives. The latter, like the electric locomotives, used the Westinghouse electrical gear in a diesel-electric configuration.

In 1939 Baldwin began to sell a standard line of diesel switchers and in 1945, a line of road diesels. In 1950 Baldwin merged with Lima-Hamilton to become Baldwin-Lima-Hamilton Corporation (BLH). In 1953 Westinghouse pulled out of the heavy traction equipment market and Baldwin did not last much longer. Some late equipment used General Electric electrical equipment, but the BLH Corporation built its last common carrier size locomotive in 1956.

Between the years 1946 and 1949 there were 56 DS4-4-1000 (sometimes referred to as the S-10 model) locomotives produced. The locomotive has a one piece frame fabricated by Baldwin. The main engine is a four cycle, six cylinder turbo-charged design, turning a 600 volt main generator, which in turn powers the four traction motors on the axles. The locomotive weighs 235,000 pounds and has a traction effort of 58,750 pounds.

The CWR equipped the engine with a unique feature: water tanks and sprays for rail lubrication on the sharp curves between Willits and Fort Bragg. Locomotive 53 was built for the U.S. Army Corps of Engineers who numbered it W8380. Number 8380 worked on various army bases around the western U.S. until 1956 when it was purchased by a dealer, Pan American Engineering. They sold the locomotive to CWR and its number was changed to 53. The locomotive worked with three other Baldwins, S/N 51, S/N 52 and S/N 54, until about mid-1980.

Locomotive Foursome Minus One

by John Bradley in the Roots of Motive Power Newsletter, Vol. 14, No. 1

The four CWR Baldwin locomotives were typically run as a foursome. On the evening of January 14th, 1970, #53 was left in the shop for a minor repair. #51, #52, and #54 departed Fort Bragg shortly after 5:00 PM on the railroad’s regular nightly freight train for the Northwestern Pacific Railroad connection at Willits. The engines pulled 27 cars in tow and the 89 mile round trip usually took from 12 to 15 hours to complete. Doubling at Shake City, 26.8 miles from Fort Bragg and at an elevation of 560 feet, half the train was left behind to facilitate the steep climb to Summit Station at the east portal of Tunnel Two. “Doubling” in railroad terminology means two trips are necessary. Summit Station is 35.4 miles from Fort Bragg at 1749 feet elevation, and it is on this portion of the railroad that eight and one-half miles of track are needed to gain a distance of a mile and a half. When they reached Summit Station, they “set out” the first half of the train, pulling it onto the siding.

The three locomotives were on the main line, ready to return for the remainder of the train, when the brakes failed, or “bled off.” They were on the east side of the summit, the downhill side headed for Willits, when they began rolling. According to press releases at the time, both the engineer and foreman jumped from the runaway diesels, suffering minor injuries. The remainder of the train crew, the conductor and brakeman, were securing the brakes on the cars set out on the siding and therefore were not on board the locomotives at the time of the runaway. The engines rolled 0.9 miles reaching a speed of 60 miles per hour, before derailing on a curve, sliding against a bank in a cut and coming to rest more or less upright. The cab of locomotive #54 is still visible today (2005) below the track — if you know where to look between mileposts 36 and 37. Considerable damage was done to the units. They were all parted out and scrapped.

Following 19 hours of work, repair crews completed a “shoofly” around the wrecks, and the railroad was reopened. The remaining diesel, #53, and a borrowed SP SD-O #3806, were used after the derailment. No. 53 operated from Fort Bragg to the summit and #3806 pulled from the summit to Willits. The NWP Steam Wrecking Hook was brought from Eureka to re-rail the locomotives and clean up the site. The railroad eventually bought former SP Baldwin #1541 and numbered it #57. It also purchased McCloud Railroad’s two Baldwin RS-12 locomotives that were numbered CWR #55 and #56.

Number 53 sat on the old Ten Mile siding in Fort Bragg until November 1984 when John Bradley rescued the locomotive from the scrappers. Included in the sale was the condition that John could use the Fort Bragg Roundhouse and the assistance of the CWR crew to return the locomotive to operating condition. The repairs took about a month and included changing all the cylinder heads, removing and replacing all four wheel-traction motor sets, and trying to find and cure many electrical problems. The locomotive was then moved to Willits and transferred to the new Eureka Southern Railroad at Dos Rios for eventual work train use. The work train was never implemented because the railroad went into bankruptcy. The engine also suffered some unresolved electrical problems.

When the railroad reopened in early 1986, the engine was moved back to Willits for storage. During its retirement there were some modifications made to upgrade #53. The batteries were all changed out. A pre-lube lubrication system was installed. Injection pumps were rebuilt and there were many other miscellaneous repairs. Chris Baldo bought the locomotive from John Bradley in 1993 and subsequently donated it to Roots of Motive Power in 1995.