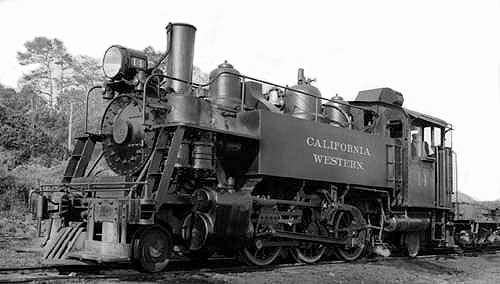 California Western No. 14 is one of the crown jewels of the Roots of Motive Power Collection. The locomotive was built in 1924 by Baldwin Locomotive Works for the Lumber Department of the California Fruit Exchange in Graeagle, California, and was sold to the California Western Railroad in 1938. To tell the story we have enlisted authors and gathered photographs from the elite circle of railroad historians in California.

Telling the story of the California Fruit Exchange era are David Braun and Paul Beckstrom who originally published their story in the Summer, 1995 newsletter of the Feather River Short Line Railroad. The story is then picked up by prominent Union Lumber Company historian Kevin Bunker, who chronicles the use of the locomotive on the CWR until it was sold to Bert Rudolph in 1956.

We have gathered photographs from the California State Railroad Museum, Ted Wurm, Doug Richter, Don Olsen, Kevin Bunker, Kenneth Yeo, and the Roots collection. Though railroad historians will always concentrate on the operators of the locomotive, we must here give due credit to Bert and Ferne Rudolph of Willits. It was their interest in railroading that rescued the locomotive from the waiting scrapper’s torch in 1956 and preserved the engine for 35 years until 1991 when they donated the engine to Roots of Motive Power.