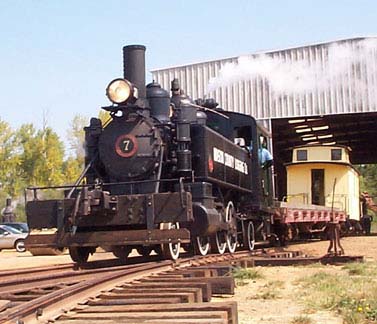 The locomotive was built as road #7 for the Black Hills and Northwestern Railroad, a subsidiary of the Mason County Logging Company of Bordeaux, Washington, near Olympia. It became surplus to their needs in 1928 and was sold to the Port of Olympia for use as a switch engine. It operated as their #2 until 1955. The locomotive was purchased in 1956 by Charles Morrow of Seattle, who was instrumental in founding the Puget Sound Railway Historical Association in Snoqualmie, Washington. The engine was leased to the Association until 1988 when it was purchased by Chris Baldo of Willits CA.

This Baldwin 2-6-2T represents the popular “double ender” design of logging locomotive which was fully capable of operating efficiently in both directions, a requirement of many of the smaller logging railroads on the West Coast. The side tanks in place of a tender behind the engine for visibility and front and rear “pony” wheels for steering the locomotive around curves in forward and reverse movements, made this class of engine ideal for logging application.

In 1999 Mason County Logging #7 was shipped to the Mt. Rainier Scenic Railroad at Mineral, Washington for a full FRA rebuild. It was returned to service on July 1, 2001 and moved back to Willits. The engine is on loan to Roots of Motive Power until completion of the restoration of ex-California Western Railroad #14.