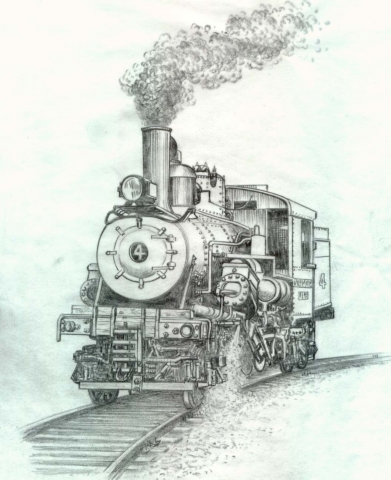 Engine #4 was build for Holmes Eureka Lumber Company in 1922 by Climax Manufacturing of Corry, Pennsylvania and carries builder’s number 1621. The engine was sold to Pacific Lumber of Scotia, California in 1937, where it was retired in 1954.

Bert and Ferne Rudolph of Willits acquired the engine in 1955 and brought it to Willits, where it was kept until acquired by The Roots of Motive Power in 1990. The engine has been restored and was operated by the Roots of Motive Power as recently as 1993 during our “School Days” demonsrations. The locomotive is a two-truck geared engine with about 200 horsepower capable of 26,400 tracktion at 200 pounds steam pressure. The unit is operated at about 50 pounds pressure today. Engine #4 was used to haul log cars in from the woods. It is not a fast machine, but is capable of moving large loads. The unit was repainted recently to honor the memory of Bert Rudolph, who donated much to the Roots of Motive Power. This is the paint scheme originated by Mr. Rudolph.