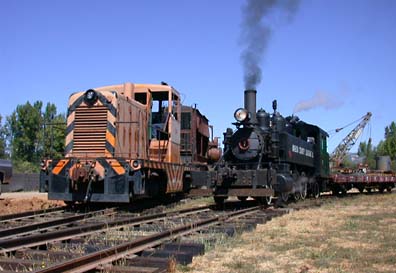 General Electric built several weight classes of this popular double-ended locomotive design. The 44-ton model was designed to provide a weight class of switch engine light enough to escape the 1937 45-ton threshold that mandated a fireman in addition to the Engineer. The engine uses two Caterpillar D-17000 diesel engines, one located in each end, which produce a total of 380 horsepower. Each engine and generator can be operated separately for light duty or in tandem for full power.

This locomotive, Construction Number 18197, was built in April 1945 for the New York, Ontario and Western Railroad as engine #103. It later became the Fernwood, Columbia and Gulf Railroad’s engine number D-3 before being acquired by the Arcata and Mad River Railroad as their #104. The #104 joined two other GE 44 tonners, #101 and #102, which had been acquired from Pine Flat Dam Contractors in 1954.

The Arcata and Mad River Railroad, affectionately known as the “Annie and Mary,” was started in 1854 as the Union Wharf and Plank Walk Company to provide access over the mud flats near Arcata to ocean going shipping. The railroad was eventually extended 7½ miles from Arcata to the Northern Redwood Company mill at Korbel.

Northern Redwood Company was owned by the Charles Nelson Steamship Company. It was over 10 years after the arrival of the Northwestern Pacific (NWP) Railroad in Arcata in 1914 that the steamship company allowed an interchange between the A & MRRR and the NWP at Korblex. During the lumber boom of the 1950s, the Annie and Mary served fifteen shippers on its 7½-mile railroad. The average daily car loadings were enough to place the road among the highest paying railroad properties per mile in the United States.