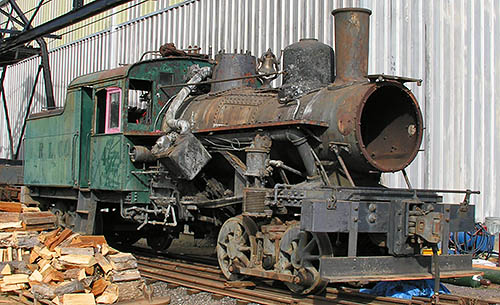 Below: During the 2010 Roots Steam Festival, the Heisler pulls in to take water into its boiler. Also in the video are the Simpson Timber Co. Fire Car, 2 U.S. Army Flatcars, one of which is carrying the “Siri” Stationary Steam Engine, and the Northwestern Pacific Railroad Caboose #13, which was full of passengers enjoying a free ride.

On February 8, 2005, Roots volunteers traveled to Arcata, CA to load a 47-ton Heisler steam locomotive onto a truck. The locomotive was headed for restoration and display at Roots of Motive Power in Willits, CA.

The engine is the former Bluestone Mining and Smelting Company No. 1, Construction Number 1351, out-shopped in December, 1916. The engine passed through several owners, last operating at the Blake Brothers quarry at Point Richmond, California. It was purchased by Bert Rudolph of Willits, who preserved the engine faithfully at his ranch east of Willits for nearly 30 years. The engine was purchased from the Rudolph estate by Rogan Coombs of Fortuna and stored at Glendale, near Arcata, for many years. The engine will be on a long-term loan to Roots from Rogan Coombs.

Bluestone Mining and Smelting Company and the Mason Valley Mines Company operated 2.5 miles of track from their mine to the railroad’s connection with the Nevada Copper Belt Railroad Company at Mason, Nevada. The line extended northwesterly from Mason up the east slope of the Singaste Range to the Blue Stone Mine.

The gear drive two-truck Heisler will join the other geared locomotive in the Roots collection, the Holmes Eureka #4 two-truck Climax, later Pacific Lumber’s #38. Both the Heisler and the Climax locomotives were popular engines in the woods where light, uneven rail, tight radius curves and grades in excess of 4% required the slower moving, nimble but powerful, geared engines. The third major manufacturer of geared engines for the woods, and the most numerous, was the Shay, built by Lima Locomotive Works.

Roots would especially like to thank the crew from Humboldt County that helped in the loading process: Wes Fulton, Bert Bertolini, Harry Pond and Steve Morris. Thanks also to the following companies for the equipment they provided: Steve Morris Logging of Glendale (cat loader), Shuster Transportation of Willits (lowbed) and Willits Redwood Company (cat loader).

from the Roots of Motive Power newsletter, April 2005

My invention relates to locomotives requiring great tractive power at moderate speed, for use in connection with roads having steep grades, sharp curves, and which are liable to have a very uneven road-bed; and my invention consists of special features and construction herinafter pointed out.
~Charles Heisler, in the text for Patent 00585031, June 22, 1897.