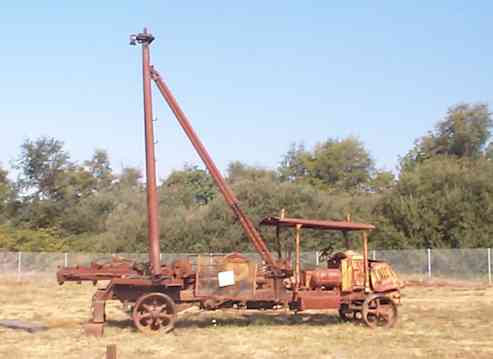 Year Built:
1936
Type of Equipment:
Logging Equipment
Loader
Traction:
Wheels
Manufacturer:
McVey Machine Shop
Manufacturer Location:
Klamath Falls OR
Motive Power:
Gasoline
Non-Motive Power:
Gasoline
In Service:
Charlie Shuster Logging Company, Leggett, CA
Keno, OR
Donor:
John Crane
Owner:
Roots of Motive Power
The McVey Loader C/N 3 was built in 1936 by the McVey Machine Shop in Klamath Falls, Oregon. The dream of a mobile loading machine kept many an early logger awake at night. In 1929 Myron McVey and O. V. Meyers had the Reo Truck dealership in Medford, Oregon and built their first truck-mounted log loader. McVey moved to Keno, Oregon and together with Carl Young started building log loaders on trucks in earnest in 1934. The shop was moved to Klamath Falls in 1937. In the depression era the truck-mounted log loader answered the need of the small logging operator, who did not have the resources for a more elaborate crane-based machine. Most McVey loaders were mounted on AC Mack Bulldog trucks. Records indicate that the McVey Machine Shop built 52 loaders from 1929 to 1957. The machines used some interesting technology for the day, including a hydraulic system to rotate the boom in a quarter-circle swing. The early machines, such as the C/N 3, used the truck engine and transmission to power the drums and the hydraulic pump, removing the Mack’s chain drive to the rear wheels and reattaching the chain drive to the drum set. later models utilized a second engine to provide power to the loader. The loading machine utilized a 40-46 foot fir boom and multiple guy lines rigged to the gantry to load logs ranging to 4-5000 board feet using bell hooks. While too small for logging the large old growth redwood of the Northern California coast, the McVey loaders were popular in the pine and fir forests of Oregon and Northern California. This McVey Loader was purchased by Crane Mills of Bly, Oregon in 1936. It later made its way to the Crane Mills operations at Paskenta, California. The loading machine was donated to Roots of Motive Power by John Crane of Crane Mills in 1994, and transported to Willits by Cliff Walker Logging of Willits where it has been stored since that time. Mendocino Redwood Company donated a lowbed and driver to move it to our new home, as well as supplying two volunteers from their road maintenance department. Among the local purchasers of McVey loaders was Charlie Shuster Logging Company of Leggett, CA, which purchased C/N 51 in 1956.from John Crane of Wanguni, New Zealand, February 25th, 2002, regarding the McVey Loader C/N 3:
My name it John Crane and today, I opened an email sent to me by a former employee of mine who is now retired, directing me to your web site to view the McVey that our company donated to your cause in 1994. It was wonderful to see that our venerable old McVey was put to some higher and better use than recycled cast iron. My dad tells me it was quite a machine in its day. My wife and I bought the Crane Mills sawmill in 1995 and shipped it to New Zealand where we rebuilt it and operate NDG Pine, shipping about 2 million BF of Radiata pine lumber per month back to the US to Crane Mills’ old customers. Truly ironic. And the irony of all irony is that we actually have about 600 BF of redwood lumber that is on its way back to Port of Oakland as I write. Very little redwood over here–just enough for us pine guys to get into trouble!
Home
Schedules
Membership
Projects
Equipment
Library
Highline Newsletter
About us