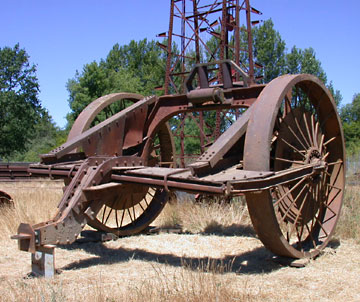 Steve Shuster of Shuster Logging recently donated a set of “Big River Wheels” from Mendocino Lumber Company. It is an early type of logging arch that was built to pull behind the Holt 75 tractors. Shuster Logging discovered the wheels during their logging operations in Big River, and preserved them at their shop in Willits. Union Lumber Company, which acquired the Mendocino Lumber Company operations, later used some of the wheels in its Ten Mile River logging operations before the more common Pacific Car and Foundry tracked arch was available. Roots volunteers moved “Big River Wheels” from the Shuster Logging yard in Willits to the Museum in February 2002.