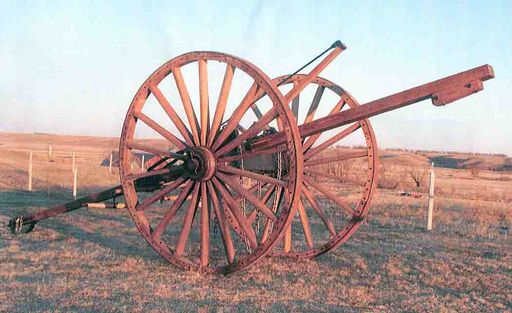 The Michigan Big Wheels was produced with wooden wheels in heights of 9, 9-1/2 and 10 feet, and sold for $250 plus $50 shipping by rail. It was copied by as many as 25 other manufacturers, and while popular for level or modestly sloped terrain, it didn’t work well on the steep forests of the west since it had no brakes.

John Webb, Sr., of Redding Iron Works in Redding, California, took Overpak’s design and came up with a means for using the logs themselves as a brake. Webb applied a slip tongue instead of the standard fixed tongue, which was a vast improvement. The slip tongue moved back and used a cam mechanism that raised the logs 10 to 12 inches off the ground when the wheels were moving uphill or on level ground, but moved forward when descending slopes, thus lowering the logs which acted as a brake.

Thus was born the Redding High Wheels, with wooden wheels up to 12 feet in diameter, weighing in at 3600 pounds, and selling for $350. (The wheels built in the east were called Big Wheels, while those produced in the west were referred to as High Wheels.) The wheel track was 7-1/2 feet, and the tongue length was 30 feet.

The Redding High Wheels typically used two teams of horses on hills and with large logs, but could get by with two horses on level ground or when pulling small logs. Because of Webb’s braking system, the Redding wheels could work on slopes up to 20 percent, whereas the Overpak patent was limited to slopes on only 10 percent.

Redding Iron Works added a cast iron hub in 1915 which could be unbolted to permit the easy replacement of broken spokes. In the late 1800’s, Daniel Best created the steam traction engine, which in subsequent years would often be used in place of horses to pull the Redding High Wheels. The C. L Best Gas Traction Company built the first track-layer in 1913, and merged with the Holt Tractor Company in 1925 creating Caterpillar, Inc.

All this activity changed the way the high wheels were used, but the end came into view in 1927 when the Red River Lumber Company of Westwood, California, experimented with an all-metal logging arch constructed of railroad rail and utilizing Athey track-laying wheels. Although the Redding High Wheels was produced until 1932, by 1930 almost all logging shows were using the new steel logging arches.

Rogan Coombs was given a pair of Redding wheels from the woods near Fortuna, and knowing what he had, set out to restore the log hauler. He located the Hansen Wheel and Wagon Shop in Letcher, South Dakota, who spent a year in restoring the high wheels. The Hansen shop started by conducting what resembled an archeological study, laying the parts out on the floor as they would have dinosaur bones. Months were spent determining how the high wheels would be reassembled. Specially milled fir came from Montana, and ash from eastern Iowa. All the wood was allowed to cure for several months.

Rogan Coombs donated the Redding High Wheels to Roots of Motive Power in December of 2005, and the impressive device has been pulled in parades and at the Redwood Region Logging Conference by the draft horses of Nolan Darnell–to the amazement of awestruck crowds.