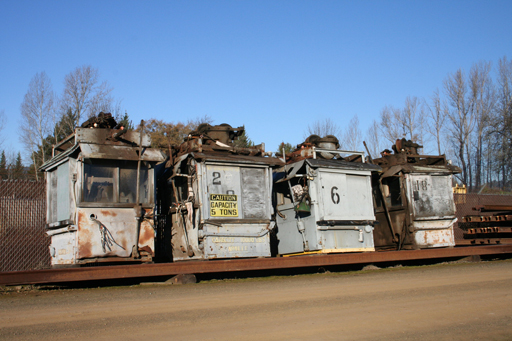 Jump ahead into the early 1900’s. Steam had been the primary motive power form for decades. But a relatively new form of energy—electricity—promised to change the way work would be done in the huge mill at Scotia. By 1914, the company had plans for an elevated trolley system powered by electricity, one which would be suspended on a mono-rail that ran throughout the sprawling facility.

The mono-rail, suspended on a huge timber trusswork, moved carriages with a winch mechanism and lifting arms that would grab a unit of lumber for transport to another location in the mill. The trusswork ran for hundreds of feet, entering the inner confines of Mill “B”, running to the storage areas outside, and over railroad tracks where flat cars were loaded and unloaded. (The railroad system for moving lumber throughout the mill was a story in itself.)

Massive 12″ by 12″ timbers supported the trusswork, many of which were sandwiched with 6″ by 12″ planks on each side. The overhead portion of the trusswork contained more 12 by 12’s, with 10″ by 12″ diagonal braces. The whole truss system was held together with hundreds of ¾” bolts, and 1″ upset rods.

The carriages consisted of several components that made up the actual lumber moving system. The dolly was a steel beam with two pairs of rollers on each end that grabbed the monorail. Each set of four rollers had its own travel motor. Attached to the dolly was a hoist motor which raised and lowered the set of four grab arms that secured to the lumber unit. The grab arms themselves were turned by yet another motor. The array of motors and controls operated on dual voltage direct current—120 and 220 volts. The whole mechanism was controlled by an operator who sat in a tiny booth (about 3-1/2 feet square) suspended from one end of the dolly. In this booth were two simple controls: move left and right, raise and lower the winch. Also in the booth were grab arm controls, alarm and limit devices, and a small electric heater. The capacity of these overhead lumber-moving carriages was 5000 pounds.

Unique to Pacific Lumber Company, the electric trolley served the mill well for several decades—long after the heyday of steam—and long after gas and diesel forklifts and loaders showed up. The last certification date for the trolleys is July 24, 2001.

Roots of Motive Power has been presented with one of these trolleys, although there are actually four on-site (three are destined for Timber Heritage Association in Humboldt County.) The cab numbers at Roots are 2, 6, 17 and 18.