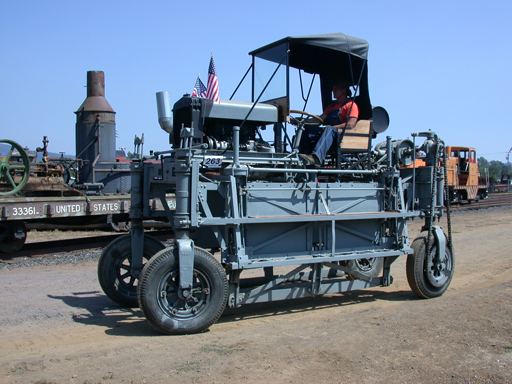 At one time, this equipment was “state-of-the-art,” being preceded in the movement of lumber around the mills by cart or hand, and succeeded in later years by forklifts. Lumber was placed in units on carrier blocks which were designed such that the machine could straddle them for pickup and movement. The gangly machines were produced in a wide variety of styles which included from four to eight wheels, and could be modified to raise and move containers, metal products, cars and much more.

The #442 Ross straddle “buggy” (as it was often called) operated at the Union Lumber Company in Fort Bragg prior to being purchased by the Coombs Lumber Company of Piercy, California. Its serial number—11—dates it as one of the first machines produced by the Ross Carrier Company. Its patent dates are 12/19/1916 and 7/9/1918, but was likely produced several years thereafter. It has a Continental 165-J4-10459 four-cylinder flathead gas engine fired by a magneto.

The Ross Carrier Company was acquired by the Clark Equipment Company in 1953.

Rogan Coombs had the machine restored at the shops of Pacific Lumber Company in Scotia, and donated it to Roots of Motive Power in 2006.