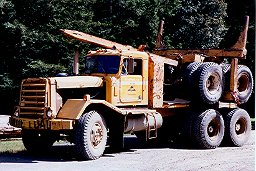 Year Built:
1958
Type of Equipment:
Logging Equipment
Truck
Traction:
Wheels
Manufacturer:
Kenworth Motor Truck Co.
Manufacturer Location:
Seattle WA
Motive Power:
Diesel
In Service:
Union Lumber Company
Donor:
Georgia Pacific
Owner:
Roots of Motive Power
Some of the acquisitions are the result of years of negotiation and follow-up, as was the case with the Off-highway Log Truck. When Georgia Pacific (GP) donated the Washington Iron Works TL-15 Trakloader to Roots, we knew our collection would not be complete until we had a Union Lumber Company off-highway truck. Nineteen of these massive trucks operated for years on the extensive private haul road system of Union Lumber Co. and later GP. Wherever I go in Mendocino County, I still see postcards and photographs taken of the Largest Load of Redwood, an off-highway truck dwarfed by its load of redwood sitting under a TL-15 loader in Jackson Valley near Branscomb.

Only one off-highway log truck, Truck No. 11, a 1958 Kenworth, remained at Georgia Pacific, being used to shuttle logs from the log deck to the sawmill. It was the survivor because it was in good shape and it interchanged quickly with the off-highway lowbed trailer. Changes in operations at the mill in Fort Bragg in Spring, 1998 finally made the truck available.

Many thanks to Georgia Pacific Plant Manager Larry Eggers who made arrangements for the transfer of the truck to Roots of Motive Power for the cost of $1. We would also like to thank Maintenance Supervisor Dan Sigetti and GP Forester Joe Sutphin for their interest in our project and their help in making the transfer to Willits so smooth.

To get the truck to Willits we enlisted Cliff Walker of Cliff Walker Logging and his lowbed driver Marty Arkelian. The two rejected my idea of loading the truck on a lowbed for the journey to Willits, choosing to drive the truck home instead. The route followed the Georgia Pacific private haul road nearly halfway to Willits at Camp 19 where the road crosses Highway 20. From there the 12 foot wide load followed the highway through Camp 20 and up Seven Mile Grade to Willits, drawing lots of attention, admiration and waves. We hope to have the truck parked under the TL-15 at the Roots Festival in September.

by Chris Baldo,  From the Roots of Motive Power Newsletter, August 1998