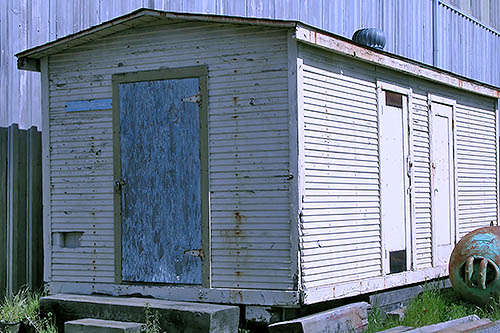 Year Built:
Unknown
Type of Equipment:
Logging Equipment
Logging Cabin
Manufacturer:
Union Lumber Company
Manufacturer Location:
Fort Bragg, CA
In Service:
Union Lumber Company, 10-Mile River
Donor:
Georgia Pacific
Owner:
Roots of Motive Power
When Union Lumber Company pulled up their Ten Mile logging branch railroad in 1949, it also put an end to the logging camp life that was an important part of the logger’s mystique. As the timber in an area played out, the entire camp would be loaded on the railroad and followed the timber to a new site. With the end of camp life and replacement of the railroad with a truck road, the innumerable cabins went everywhere. The route of the California Western Railroad is still dotted with camp cabins now used as storage sheds. A few made it to the Union Lumber Company sawmill in Fort Bragg and were used for storage. In doing some consolidation at the sawmill, Georgia Pacific’s Plant Manager Ron Holen and GP Maintenance Supervisor Doug Colberg arranged for one of the last cabins to be donated to Roots of Motive Power in April 2000. Our cabin had become an electrical storage shed for the old planer. The cabin is built of redwood and should provide good storage for Roots artifacts until we want to restore it into period living quarters. Our cabin was originally a bachelor quarters; the cabin was divided in half with an interior wall and had a separate entrance for each “duplex.” The camp cabin numbers are still in place over the doors, #43 and #44. Thank you Georgia Pacific for the donations. Also, a note of thanks to Anderson Logging of Fort Bragg for hauling the cabin to Willits.