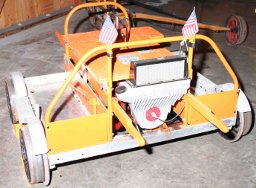 This car is a Model M-9 produced by Fairmont. It has a one-cylinder, two-cycle engine which gave it a distinctive “putt-putt” sound as it moved down the tracks. It was intended solely for use as a track inspection vehicle, and would generally be used by only one individual. As such, it was built light enough that this individual could remove the car from the tracks were a train coming.

This car was restored and donated to Roots of Motive Power by Jim Haskins.