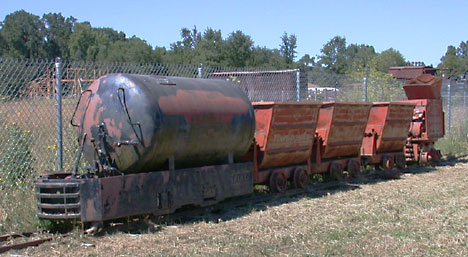 Photo:
© Bruce Evans
Year Built:
Unknown
Type of Equipment:
Other
Mine Train
Traction:
Rail Trucks
Manufacturer:
EIMCO Mining Machinery International
Manufacturer Location:
Brushfork, WV
Motive Power:
Steam
Donor:
State of California Department of Geothermal Resources
Owner:
Roots of Motive Power
The State of California Department of Geothermal Resources has donated a mine train engine and several ore cars to Roots of Motive Power. Thanks to Roots member, Vrain Conley, for arranging for this donation. Recently Vrain and new Roots member Burt Dudley drove to the site at the Geyser Unit 15 Power Plant where they were met by Kenneth F. Stelling, Geothermal District Engineer. There they spent several days loading the mine train engine and ore cars. They transported the train to Healdsburg. It is being stored there until we can find a volunteer to transport it to Willits. They also got lots of spare parts that can be used on all sorts of projects.

From the Roots of Motive Power Newsletter, August 1998

Update: The mine train engine and ore cars were moved to the Roots facility in Willits in the fall of 2000.