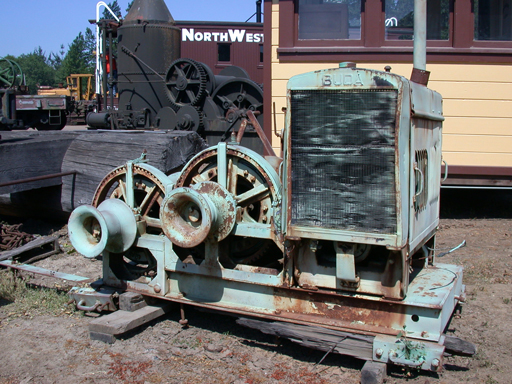 Photo:
© Bruce Evans
Year Built:
c. 1950
Type of Equipment:
Other
Winch
Manufacturer:
Novo Engine Company
Manufacturer Location:
Lansing, MI
Non-Motive Power:
Gasoline
In Service:
Ukiah, CA
Donor:
Dan Rogina
Owner:
Roots of Motive Power
The Novo Engine Company of Lansing, Michigan was primarily a manufacturer of gas and kerosene engines. The company started out as Cady and North, who were owners of a small repair shop in North Lansing back in 1890. This company became Cady and Hildreth, and later Hildreth and Son. In 1901 they became Hildreth Motor and Pump Company, then Hildreth Manufacturing Company in 1906.

The company manufactured two-cycle marine engines and small farm pumps until 1908, when they started making vertical four-cycle hopper-cooled engines. These engines were applied to a variety of farm equipment, pumps, mixers and other devices. Their engines ranged from 2 to 15 horsepower.

Finally in 1911, they adopted the name Novo. When they started with more modern internal combustion engines we don’t know, but they were known to venture into hoisting equipment, hence the winch shown here.

This winch #P6736 is called a “Novo Outfit,” and is powered by a Buda Model H217 4-cylinder gas engine. (The Buda Engine Company survives to this day.) It was purchased by Dan Rogina of Ukiah in 1965, but the location and type of its use is unknown. Mr. Rogina donated the unit to Roots of Motive Power in 2006.