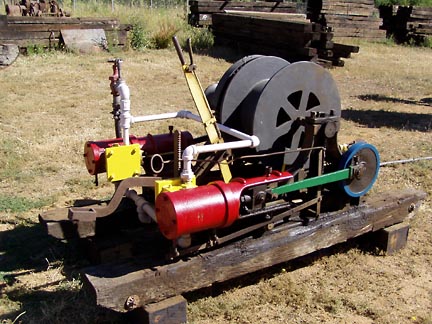 This small steam winch was built by Orr and Sembower in the early 1900’s. Such winches were often used for loading and unloading cargo from ships, mounted either on the ship or on the dock, but were applicable to many uses.

Orr & Sembower was founded in 1885 and headquartered in Reading, PA. They erected a plant in Cumru, PA, and incorporated in 1890. As of 1928, W. Harry Orr was President, and G. K. Sembower was secretary. They also had locations in Chicago, New York City and Boston. In 1891 they had 175 employees but at other times reportedly had up to 250 workers.

They were a well-known manufacturer of portable steam engines and vertical hoisting engines. These engines were built in sizes of 6, 15, 20, 25, 30, and 40 horsepower.

Not much is known about this particular winch other than it was found in a berry patch in Fort Bragg by Gene Roediger who donated it to Roots of Motive Power. At Roots, the winch was restored to operating condition with the various components painted for use as an instruction tool.