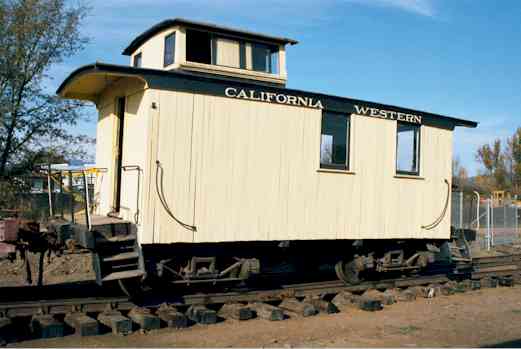 Year Built:
1914
Type of Equipment:
Rail Car
Caboose
Traction:
Rail Trucks
Manufacturer:
Unknown
In Service:
California Western Railroad
Donor:
Rudolph Estate
Owner:
Roots of Motive Power
The exact history of caboose #04 is in question, as is the case of all CWR wooden cabooses. While it is very likely that #04 was one of a series built at Fort Bragg in the teens and 1920s, there is at this time no confirmation that this is the case. The “series” of cabooses was believed to have been numbers 04, 05 and 06. Photographs of cabooses 04 and 05 show considerable similarities in their construction, so it is possible that a series of cabooses were built at the same time, or of the same design. No photographs of caboose 06 have been located. Research, including photographs and conversations with railroad historians, indicates that the caboose in Roots possession is caboose 04. The remains of the numbering on the left side also appear to support that the caboose is 04. The photo of 04 in service shows features identical to those of the Roots caboose. While no other conclusive evidence has been located, it must be assumed that the Roots caboose is in fact number 04. CWR wooden cabooses were of a simplistic design and function. This was typical of early cabooses. They were intended for use by the freight crews, and as such included no special detail or ammendments. They were constructed primarily of clear fir, with very limited redwood trim. It is possible that some early-day plywood was used, with metal parts obtained from other railroad equipment or manufactured in the shops. Designs were quite simple yet functional. There was very little, if any, decoration applied to the cabooses, and the style of hardware and manufactured metal parts shows no ornate renderings. California Western Railroad is believed to have had 11 wooden cabooses between 1909 and 1964. CWR cabooses were numbered sequentially, starting with 01 and continuing through 11. Cabooses prior to #10 utilized a zero before the specified digit, hence the numbering system 01 through 09. Two of these cabooses, number 07 and number 08, were dedicated specifically to logging operations as opposed to general freight operations. These cabooses were slightly longer in length, and were likely utilized for the transport of loggers to and from the woods. Lettering in the photograph of caboose 05, from the Roy Graves collection at the Bancroft Library, appears to indicate this caboose may have been built in September 1921. This would be consistent with the “series” construction of numbers 04, 05 and 06. Number 05 is further indicated to have a weight of 26,400 pounds, which appears to also be the weight of caboose 04, based upon remaining lettering on the left side of the caboose. Caboose 04 was acquired by the Rudolph Estate, and was donated to Roots upon the passing of Mr. Rudolph and the settling of the estate.