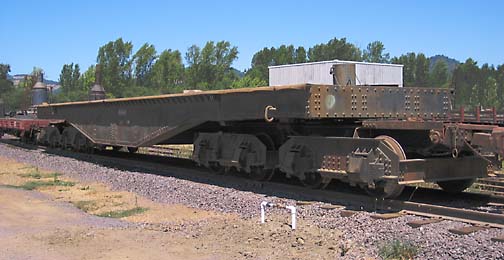 by John Taubeneck, Seattle, WA In 1926 Pacific Car and Foundry introduced the 16-wheel donkey-moving car. These cars had the same load rating (100 tons) as standard 8-wheel cars but were designed to prevent broken rails and bridges. Half of the car and its load was distributed over 16 feet of track, almost 3 times the length of the truck of a standard car. The rated capacity of these cars was based on their safe loading on 56 lb. rail and traveling at mainline speeds. There are photographs of these cars in use with 150+ ton loads.