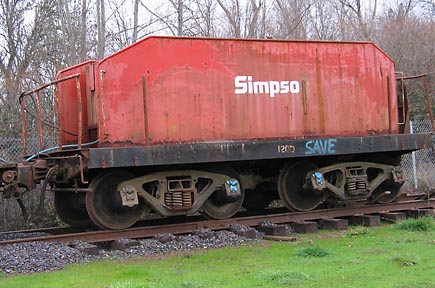 Year Built:
Unknown
Type of Equipment:
Rail Car
Fire Car
Traction:
Rail Trucks
Manufacturer:
Simpson Timber Company
Manufacturer Location:
Shelton, WA
Motive Power:
Train
Non-Motive Power:
Electricity
In Service:
Pacific Northwest
Owner:
Roots of Motive Power
Fire prevention was always a concern in the heavily wooded timberlands of Simpson Timber Company’s Pacific Northwest operations out of Shelton, Washington. Simpson built four “Fire Fighting Cars” in their shops which were pulled behind their diesel locomotives. The cars were equipped with a spray bar to wet the area directly behind the locomotive and to put out any sparks generated from the wheels and brakes. They were also equipped with an electric fire pump which operated off of the locomotive electricity supply, and several hundred feet of fire hose. The cars also acted as physical protection for the locomotive, in case any of the logs on the trailing cars shifted forward.

Roots considers the short coupled car to be a potentially useful item as a water tender if at a future date one of the Roots locomotives is operated on the main line. Most of the cold water tanks that supplied steam engines have been removed, and short of pulling a larger tank car, water supply for main line operations would be a significant problem.