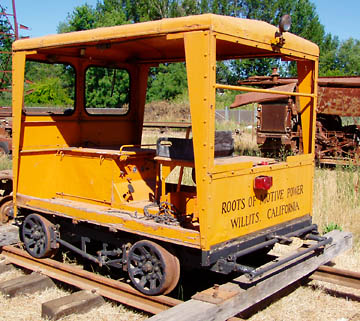 Fairmont has been building rail motor cars since the early 1930’s, and has produced these vehicles in a wide variety of sizes and configurations. From the small M9 inspection car (see the Coos Bay M9) sized for a single track inspector, to large gang or section cars holding a dozen workers, these cars have been used by railroads throughout the country by the thousands to get the work done.

The “speeder” at Roots appears to be a Model A3-C which would have been produced in the early 1950’s—possibly as late as 1956. The A-3 at Roots was donated by Robert Fansler about 1992. When it arrived, the Waukesha ICK motor was broken, so another motor (of a different model) was installed. Due to the configuration of the replacement motor, it was necessary to move the front axle ahead, changing the original 41-5/8″ wheelbase to 54-1/4″. The car weighs in at around 1500 pounds, and was used to transport as many as eight workers to their job. With a 4-cylinder Waukesha gas engine, they could also pull a trailer (push car) which held their tools and a small amount of track repair parts.

The origin of Roots speeder is not known, but was possibly Southern Pacific. It is used routinely to perform all track installation, repair, and maintenance.