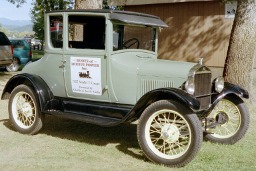 Year Built:
1927
Type of Equipment:
Automobile
Traction:
Wheels
Manufacturer:
Ford Motor Company
Manufacturer Location:
Highland Park, MI
Motive Power:
Gasoline
In Service:
Willits, CA Constable
Donor:
Charles Ruelle
Owner:
Roots of Motive Power
This Model T Ford Coupe was at one time used right here in Willits by the local constable. The position of constable was originated in England in the mid-19th century. In California, the constable was an official appointed by (and worked for) the court system. The constable’s duties included the serving of summonses, subpoenas, orders, injunctions, writs and the like. So if this car showed up at your house—you were probably in trouble. Nineteen twenty-seven was the final year of production of the Model T. The following year would see the introduction of Ford’s Model A. The “tin lizzie” was the car that put America on wheels. It was mass-produced from 1908 until 1927 utilizing Henry Ford’s new and innovative assembly line process. The engine was a four-cylinder with a modest 20-horsepower, and the average car weighed only 1200 pounds. This car was restored by Charles Ruelle of Ukiah, and was donated to Roots of Motive Power in 2004. Photo by Bruce Evans