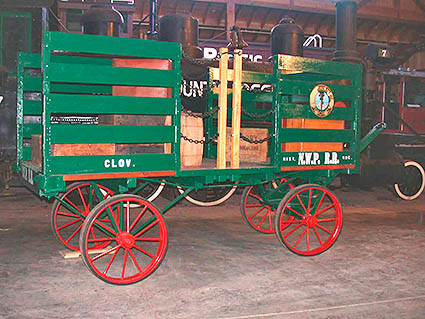 Year Built:
Unknown
Type of Equipment:
Baggage Cart
Traction:
Wheels
Manufacturer:
Unknown
Motive Power:
Animal
In Service:
Cloverdale, CA
Owner:
Sonoma County Transit Authority
An original NWP baggage cart, used for many years in railroad service, has been acquired by Roots and is on display in the Engine House of the Mendocino County Museum. On loan from the Sonoma County Transit Authority, the cart was restored by the Northwestern Pacific (NWP) Railroad Historical Society. The work was performed by Don and Jeff Millerick of Sebastopol, who also helped with the restoration of NWP Caboose #13. The Millericks found the baggage cart in a nursery in Sonoma County, rotted and falling apart. They removed the wood parts, using them as templates, and replaced all but one piece. They also cleaned and painted all the metalwork and when the project was completed the cart was like new. The actual history of the cart is not known, but it is a standard Southern Pacific Railroad design, of which there were hundreds in use. After delivering the NWP cart the Millericks picked up the Roots baggage cart and took it to their shop in Sebastopol where they will disassemble it and start to restore that cart. The plan is for the Millericks to do the metalwork and painting and Bruce Evans will do the woodwork in his home shop in Ukiah. There has been some talk of replicating the Roots cart as a California Western product. Baggage carts have been in use since the advent of trains in the 1830s. Many old carts were still in use until the passing of mainline passenger trains in the 1970s, but a rare survivor can still be found. Always ready to receive or deliver goods and baggage, the NWP cart is displayed complete with boxes and luggage, just waiting for the next train. from the Roots of Motive Power Newsletter, August 2004