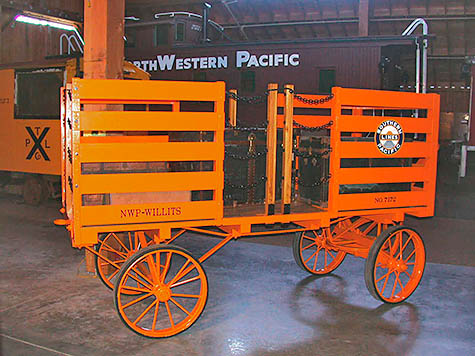 Year Built:
Unknown
Type of Equipment:
Baggage Cart
Traction:
Wheels
Manufacturer:
Unknown
Motive Power:
Animal
In Service:
Southern Pacific Railroad
Donor:
Bert Rudolph
Owner:
Roots of Motive Power
Baggage carts were one of the utilitarian devices used by almost all railroads to move goods and luggage around their depots. They received little more attention than the broom in the corner, but without them, the expediency of railroad freight service would have been severely compromised. From the beginning of railroading in America in the 1830s, there was the need for getting a passenger’s luggage or a store owner’s goods to and from the trains. Hand trucks, motorized trucks, conveyors, loading docks and more were utilized in the transfer of everything that went on or off a train. But the baggage cart was perhaps the most common of these forms of transfer. There were literally thousands of baggage carts in existence throughout the heyday of railroading. In addition to the railroads, baggage carts were owned and operated by transportation companies such as Wells Fargo and Railway Express and these carts would sit beside those of the railroads’. Hand-powered carts gave way to motorized carts or trailers pulled by a variety of motorized vehicles. Even today baggage carts can be found at stations serving Amtrak’s trains. Because baggage carts took a back seat to the trains themselves, little has been recorded of them and few photographs specifically highlighting the carts have been taken. If they appeared in photographs at all, it was to show the crews doing their work of expediting goods, or they were seen sitting on a platform in a depot shot. Roots of Motive Power acquired their Southern Pacific baggage cart around 1987 through a generous donation by Bert Rudolph. Mr. Rudolph had reportedly purchased it from the Northwestern Pacific Railroad and at the time it had been in use at the Willits Depot. Little else is known of the history of this cart; however Roots records indicate that it may have been used by a maintenance-of-way firm called the Big Hook Crane Company which operated on the NWP out of Willits. It is surmised that the baggage cart was used at the Willits Depot prior to going into maintenance-of-way service. It was given the number 7172 – the significance of which is unknown. Railroads appear to have not commonly numbered their baggage carts, unless it was a local thing when many carts were in use at a specific depot. Baggage carts (or wagons) of this type were around depots for most of the 20th century. When this cart was built is not known, but it was likely sometime around the first quarter of the century. A metal tag affixed to a beam on the frame indicates that the cart was rebuilt in November of 1953. In June 2004 Bruce Evans and Jeff Millerick agreed upon a plan to restore the Roots baggage cart. Jeff and brother Don had years earlier performed the professional restoration of an NWP baggage cart, which is presently on display in the Mendocino County Museum Engine House. Jeff and Don took the cart to their shop in Sebastopol in preparation for the work and Bruce got the approval of the Roots Board of Directors to perform the restoration. As the project started, the baggage cart was literally falling apart. The wood had rotted to the point that too much jostling would cause pieces to fall off. And the metalwork, while mostly still present, was rusted and corroded. Over the next eight months, plans were laid, parts were reproduced, wood was cut, and metal was cleaned. Jeff and Don concentrated on sandblasting and priming the metal, as well as procuring nuts and bolts that required replacement. Bruce took on the task of reproducing all of the woodwork, which necessitated following patterns and measurements made from the NWP baggage cart. Most of the replacement wood was recycled lumber, which was considerably less expensive, but also dimensionally stable. The Board of Directors had indicated that the cart should be restored to its original Southern Pacific ownership colors. Research was conducted to locate the colors and lettering from such a cart, with little luck. The color was relatively easy – SP orange. But a little discretion was practiced in the lettering to identify the cart as coming from the NWP in Willits, along with the application of Southern Pacific Sunset logos to help catch the eye. Russ Clover of Clover House (model railroad decals) in Sebastopol created lettering and had it produced into stencils for easy application. Bruce had the SP logos custom-made in Oregon. By February the cart had been restored and was delivered in March of this year. It is prominently displayed in the Engine House and even carries luggage and trunks donated by Mike Holland of Field-brook, Humboldt County. Thanks for this restoration project go to the Millerick Brothers, who donated over $600 in materials and supplies and to the Roots members who donated $825 through the Board approval of the project. Bruce Evans put in another $300 worth of lettering, logos and materials. The value of the project would double if one were to count the labor that went into the project – nearly 200 hours between the Millericks and Bruce Evans. So another piece of history returns to us, to educate and please crowds for many years to come. by Bruce Evans from the Roots of Motive Power Newsletter, August 2005